Bank of England Does It Again; US Nonfarm Payrolls 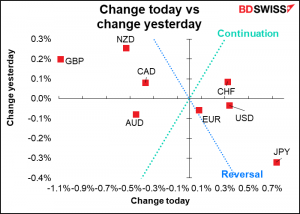 Well we now know what the theme song of the Bank of England is! (You’ll have to click the link to find out).BoE Gov. Bailey had warned the world that “we have got to in a sense prevent [higher inflation]becoming permanently embedded because that would obviously be very damaging” and that monetary policy “will have to act and must do so if we see a risk.” In case anyone misunderstood what he said, a few days later he said that “we at the Bank of England have signalled, and this is another such signal, that we will have to act. But of course that action comes in our monetary policy meetings.”

As a result the market had priced in a 15 bps hike at this meeting, but in the event the vote was 7-2 to keep it unchanged. I was surprised that Chief Economist Huw Pill didn’t vote to tighten after warning that inflation was likely to hit 5%, up from the Bank’s previous estimate of a 4% peak. The Bank’s new forecasts encorporate this change as they now see inflation peaking “at around 5% in Aprili 2022.” The vote to keep the quantitative easing program going was 6-3.

Bailey protested that he had never pledged to act at any particular meeting. (Maybe he thinks he should have a different theme song, although I think this one might be more appropriate.) I say he needs to learn his job. One of his predecessors, Mark Carney, was labeled an “unreliable boyfriend” back in 2014 after warning that rates could rise “sooner than the market expects” and yet less than two weeks later dampening down such concerns in testimony to Parliament.

The Monetary Policy Committee (MPC) does still expect to raise rates at some point in the future. The forward guidance in the statement read:

The Committee judges that, provided the incoming data, particularly on the labour market, are broadly in line with the central projections in the November Monetary Policy Report, it will be necessary over coming months to increase Bank Rate in order to return CPI inflation sustainably to the 2% target. 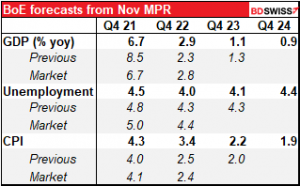 In sort of a déjà vu, the market now sees pretty much the same profile of rates, just pushed out one meeting and peaking at a lower level, thanks to the Bank’s forecast that inflation would be below 2% at the end of the forecast horizon. The 15 bps hike that was expected at this meeting is now forecast for the December meeting. 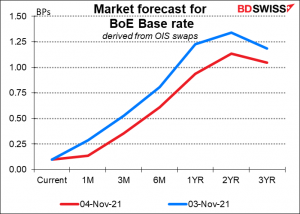 The all-around collapse in GBP needs no explanation. But with stock markets continuing to plow further into record territory, why is the supposedly risk-sensitive JPY the best-performing currency? I suppose it’s a reconsideration of the pace of global tightening.

The Bank of England had been considered one of the more hawkish central banks, and yet they aren’t tightening yet. Fed Chair Powell made it clear that “lift-off” isn’t in the cards for the US until midway through next year. The European Central Bank has repeatedly stressed that the market is getting ahead of itself. Maybe, just maybe, that’s correct? Not every central bank is going to follow Wednesday’s move by the Central Bank of Poland and tighten policy by 75 bps together with a pledge to do “whatever it takes” to rein in inflation.

The change set off a global rally in bond markets, with UK gilts of course leading the way. Yields declined at both ends of the yield curve, with most markets seeing bull flattening (long rates declining more than short rates). The UK was the main exception as short rates collapsed. 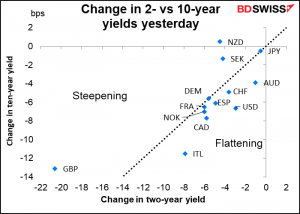 EUR/CHF continued its seemingly inexorable decline. Where oh where is the Swiss National Bank?

Oil initially gained after OPEC gave oil consumers a big raspberry and stuck to their plans to raise oil production by 400k barrels a month. However prices fell back later after a spokesperson for the US National Security Council said that the US would consider “the full range of tools” to protect the economy. Energy Secretary Granholm last month said that releasing crude oil from the Strategic Petroleum Reserve was being considered.

Of course, the irony of this all is that comparing current output with the post-pandemic low, Saudi Arabia has increased its output by more than the US has (19% vs 15%, respectively) while Russia has increased it as much as the US. Furthermore, why did OPEC cut its output to begin with? Because when US oil prices were falling, The Former Guy threatened Saudi Arabia with a cut-off in military aid if they didn’t cut production. But that’s neither here nor there, I guess. Blaming problems on foreigners is always a winning strategy. I expect oil prices to rise further and for CAD to outperform as a result. 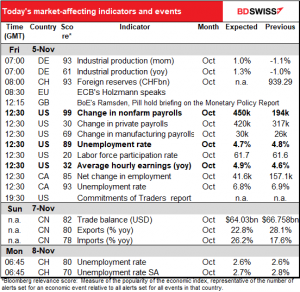 The market is looking for a headline figure of 450k. This would be good but not great, in line with what we’ve been seeing in recent months. Not as good as June or July but better than August or September. There’s a big debate going on about why this is so: it certainly isn’t because of a lack of jobs, so is it because of a mismatch between the skills of the unemployed and the jobs on offer, or because of fears about the pandemic, or are people just tired of working and taking early retirement? 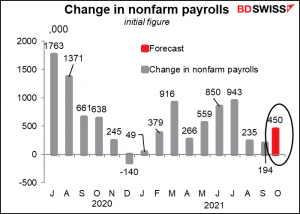 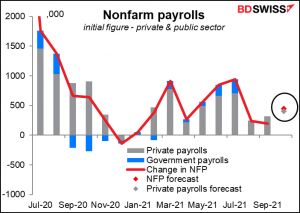 The unemployment rate is forecast to fall a bit and the participation rate to rise. All good stuff, but hardly “maximum employment” yet. 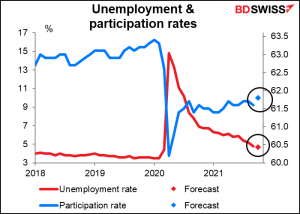 Average hourly earnings are expected to be up too, but still below the rate of inflation. No wage/price spiral that the Fed has to worry about yet. Meanwhile, workers don’t have to worry about getting used to a higher standard of living. 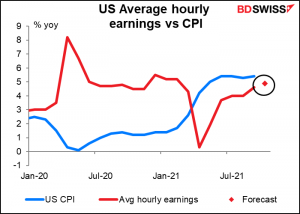 Given that the Fed Wednesday finally announced the long-awaited beginning of the end for its $120bn-a-month quantitative easing program, why should we care about the NFP figure anymore? Because we’re now waiting for “lift-off,” i.e. the start of the Fed’s rate-hiking cycle. The members of the rate-setting Federal Open Market Committee (FOMC) forecast back in September that there would only be one rate hike next year, but the market is betting on at least two and sees a good (26%) chance of three. 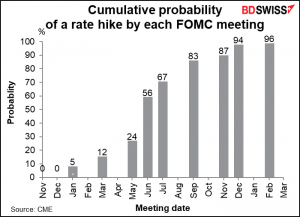 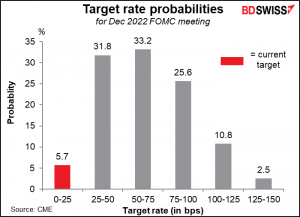 The FOMC has said it wants to reach “maximum employment” before it starts hiking rates, which is a pretty high bar to get over. What would maximum employment be? Well their forecast for employment in 2023 and 2024 is 3.5%. The fact that a) this is the lowest rate we’ve actually seen in some 50 years, and b) they forecast that it stays there for two consecutive years, suggests to me that they think this is as low as it can go. I don’t see the US hitting that level next year; accordingly, I think the market is overly aggressive about when the Fed might start raising rates. If so, the dollar could weaken. But that’s a story for next year, not this year.

Traders interested in taking a position around the NFP would be wise to consider USD/JPY rather than EUR/USD as the former tends to see more volatility on these days. 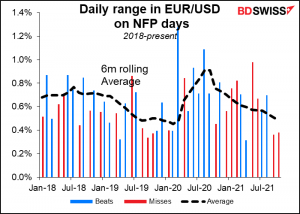 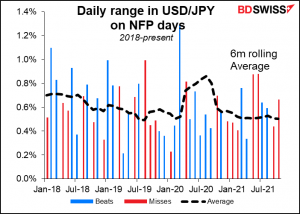 While the US employment data captures the market’s attention, Canada also announces its employment data at the same time. The market is expecting a further decline in the unemployment rate… 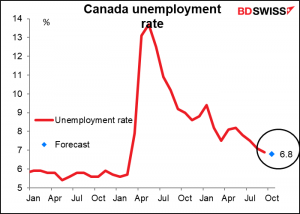 …but only a modest increase in the number of people working, following the relatively large jump in September. 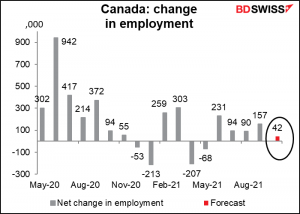 Canada’s employment last month regained the pre-pandemic level and is now set to move even higher. This compares to GDP, which is still some 1.4% below pre-pandemic levels. It may be harder for Canada to see much stronger gains than this in employment. 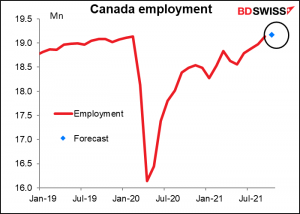 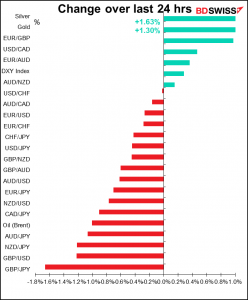