CAD Down, JPY Up on Risk Aversion; ECB Meeting 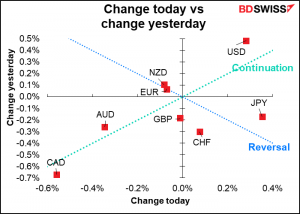 CAD was the main mover yesterday as the Bank of Canada kept its policies unchanged. I’m surprised at the size of the move, because this was the consensus view (including me) and so it shouldn’t have been such a shock to the market. Furthermore with oil and several other commodities up on the day, that usually would’ve been positive for the Loonie. The BoC said it “continues to expect the economy to strengthen in the second half of 2021, although the fourth wave of COVID-19 infections and ongoing supply bottlenecks could weigh on the recovery.” The final paragraph, the one with the forward guidance, was exactly the same as the previous month except for one word: ast time they said they expected to hold their policy rates unchanged until “sometime in the second half of 2022” and this time they dropped the word “sometime.”

There was little change in the market’s expectations for BoC rates. 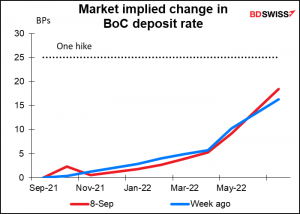 Maybe I’m making too big an issue out of the move – it wasn’t much more than what AUD did and could easily be explained by the general risk-off mood in the market, as all the major European bourses and the US stock market closed lower yesterday.

It could also be market positioning. USD/CAD risk reversals – the price of USD/CAD calls minus the price of puts – have been gradually moving higher since May and jumped Tuesday and Wednesday, indicating that people are getting nervous about the pair and want to buy protection. That might’ve created some hedging flows from option dealers. 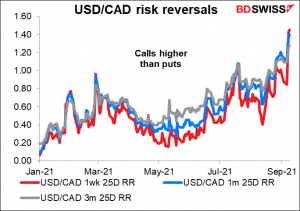 Nervousness about CAD is to be expected. At the beginning of the week CAD was the best-performing G10 currency this year ( 1.66% vs USD, including interest), meaning some people must have large profits to protect. (As of today it’s #1, after GBP, up only 0.18% YTD.) 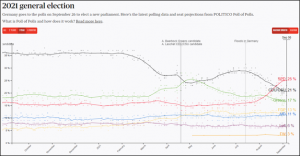 However this poll by Allensbach, which is thought to be the most CDU-friendly pollster, has the race somewhat tighter and the Greens much further behind. 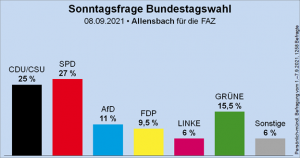 But this one has the CDU/CS falling below 20% for the first time in post-war history! 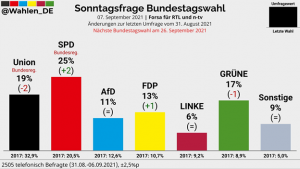 Still, the CDU/CSU and SPD together wouldn’t have 50%. Plus the SPD, which has languished as the junior member of a coalition with the CDU/CSU for many years now, may want to have a coalition without them. The SPD Greens would have 43%, meaning they’d need another ally. Would they choose the FDP, which is far to the right of either of them, or the Left (Linke), which is far to the left? Neither is a good fit. That may be the crucial decision for Germany this year.

Japan elections: a fresh face with the same old ideas

Speaking of elections, a woman has entered the race for the leadership of Japan’s ruling Liberal Democratic Party (LDP)! Since the leader of the winning party becomes Prime Minister, and the LDP is bound to win, this is the race for PM. Sanae Takaichi hasn’t a snowflake’s chance in hell of winning IMHO, but you might want to know something about her. (This is taken from Wikipedia and what must be the longest Twitter thread I’ve ever seen, by the Japan political analyst Tobias Harris (@observingJapan).

She’s relatively young (54) for a PM. She’s a Nara native, went to Kobe University and graduated from the faculty of business administration. She attended the Matsushita Institute of Government and Management, an academy set up to train potential politicians with a conservative/reformist conservative bent. She worked for a member of the US Congress, Colorado Democrat Pat Schroeder. After returning from the US, she worked as an instructor at Nihon Keizai junior college, connected with Asia University. In a fairly short time, she became a regularly quoted pundit and wrote a book arguing for more civil involvement in politics.

She formally entered politics in 1992, seeking the LDP’s nomination to run for a House of Councillors seat in Nara. She was denied the nomination but ran anyway as an independent. She finished second in the four-candidate race. But she tried again in 1993 and won. She started as an independent but has since joined the LDP. She’s held several cabinet posts; currently she’s Minister of Internal Affairs and Communications.

Don’t think “woman worked for Democrat in the US = unconventional politician = radical for Japan.” On the contrary, she’s quite conservative, shockingly so in some ways.

● She headed an LDP group that opposed legislation that would allow married couples to retain separate surnames after marriage, even though she still used her maiden name as a politician.
● As Minister of Internal Affairs and Communications she suggested TV broadcasters could have their license revoked if they air programs the government considers politically biased (biased = not what the government wants to hear).
● She’s visited Yasukuni Shrine several years on August 15, the day of Japan’s defeat in WWII. This is where the souls of many Japanese war criminals are interred, not to mention there’s an attached museum that commemorates Japan’s efforts to liberate South East Asia from the grips of the colonialist West and form the Greater East Asian Co-Prosperity Sphere (an effort celebrated far more in Japan than in SE Asia, for some reason).
● In 2011 she was involved in a movement to protest a Diet resolution to commemorate 150 years of relations between Japan and Germany. The problem? The resolution condemned the 1940 Tripartite pact between the Axis powers as “causing a great deal of trouble.” As a result, the protestors said that, in Takaichi’s words, the resolution’s “contents coerce a false view of history.” In the same vein, in 1994 she promoted a book praising Hitler’s electoral talents. 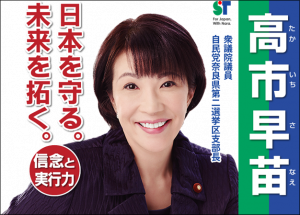 Brexit latest: from The Independent

Also from Reuters: Britain no longer in top 10 for trade with Germany as Brexit bites

BERLIN, Sept 8 (Reuters) – Britain is on course to lose its status as one of Germany’s top 10 trading partners this year for the first time since 1950, as Brexit-related trade barriers drive firms in Europe’s largest economy to look for business elsewhere. 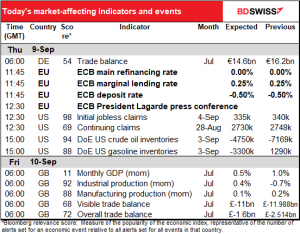 It’s ECB day! Not to repeat something you read Tuesday and Wednesday, but of course I covered this subject in depth as usual in my fulguratingly insightful Weekly Outlook. And as usual, I’ll repeat the main points here anyway.

The question facing the ECB is what to do about their Pandemic Emergency Purchase Program (PEPP), the EUR 1.85tn emergency program set up in March 2020 to counter the impact of the virus on the eurozone. The Governing Council pledged to keep it going “until at least the end of March 2022 and, in any case, until it judges that the coronavirus crisis phase is over.” In April it decided to conduct PEPP purchases “at a significantly higher pace than during the first months of the year,” a decision that it reaffirmed in June and July – although the data suggests that they slowed the pace noticeably from the week of July 30th (averaged EUR 16.8bn a week the last two weeks of August, vs EUR 24.6bn a week the first four weeks of July). 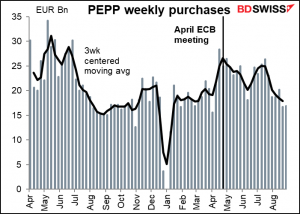 Now however the hawks and doves disagree about what to do with it. Some people say they should wind it up on schedule without a replacement, while others want to keep asset purchases going at a strong pace to support the inflation target.

Given the concerns about the virus and the long time before they have to make a decision, I expect that they will stand pat and wait for more information. Perhaps they will take a page from the Fed and ECB President Lagarde will make some statement at the annual ECB Forum on Central Banking in Sintra, Portugal (well, virtually this year, but) on Sep. 28th and 29th. The title is Beyond the pandemic: the future of monetary policy.

If they decide to hold off on making a decision, as seems likely to me (and most other analysts), then the focus will be on the new staff forecasts. The June forecasts are still preternaturally close to the market forecasts, suggesting that we shouldn’t expect any major changes in the outlook. 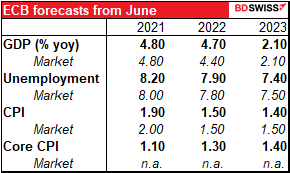 The ECB’s 2023 inflation forecast is a bit below the market’s. Even if they were to increase it to slightly above the market forecast – say, 1.6% — that would still be well below their new target of “2% inflation over the medium term.” The fact that they expect their current policy will fail to meet their goal within the forecast horizon should keep them on a dovish path for now. That could be negative for EUR.

In recent months, EUR/USD has tended to fall (i.e., the euro has weakened) on the day of the meeting, but the move has often been reversed, at least slightly, in the following days. Note that EUR particularly strengthened in April (grey line), after they announced that they’d pick up the pace of PEPP purchases. A paradox. 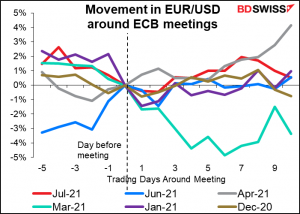 After that comes the dreaded US jobless claims.

Initial jobless claims are expected to be down 5k, which is pitiful but par for the course nowadays – they were up 5k last week. 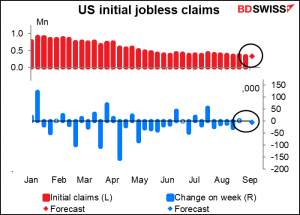 Over the last month they’ve averaged a meager -11k a week. That’s not great, but at least they’re headed down. 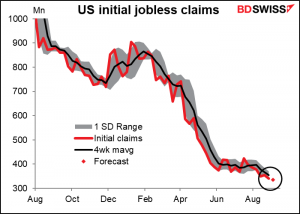 Continuing claims are expected to be down by a similarly miserable 18k. They’ve been declining more steadily than initial claims. Note that this week the continuing claims data is still for August. It will be two more weeks before we get past the Sep. 6th cutoff for special Federal employment benefits, which some heartless people believe will result in millions of people finally getting off their duffs and finding a job – although the data so far says no. 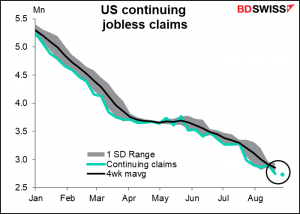 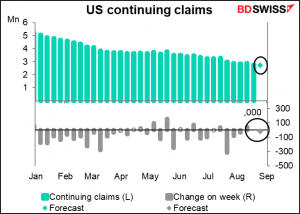 Then it all goes quiet until we ferry across the Mersey and get treated to the UK short-term indicators, including monthly GDP, industrial & manufacturing production, and trade.

July GDP is the main indicator. The market looks for a relatively small increase, the smallest since the decline in January. The gains in activity are expected to be widespread. The service sector should be the main source of growth, thanks to the gradual lifting of lockdown restrictions. Production should also rise thanks in part to the reopening of the Forties North Sea pipeline. And construction is forecast to rise, too.

While the pace of growth is not particularly exciting, I think the fact that the economy continues to expand is likely to be encouraging in and of itself. Added to good industrial production and trade data (see below), I think the figures could be positive for GBP. 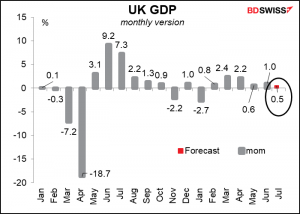 Industrial and manufacturing production are both expected to be up 0.4% mom. That’s fairly good compared with recent months. 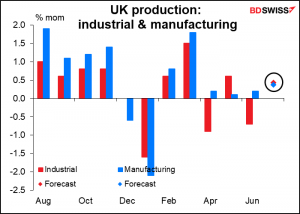 It would bring IP to -2.7% below pre-pandemic level and manufacturing production -1.7%. 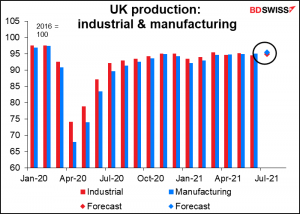 Finally, the trade deficit is expected to narrow, both at the visible and overall level. I’m amazed. I can only assume it’s because the country can no longer import anything due to bungled Brexit. Speaking of which, TIL that “The British tax office has admitted that British businesses will spend £7.5 billion a year handling customs declarations — as much as they would have done under a no-deal Brexit.” That’s not far off the country’s net annual contribution to the EU budget of GBP 9.4bn. Some Brexit savings! 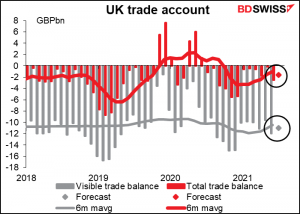 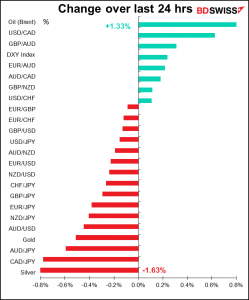