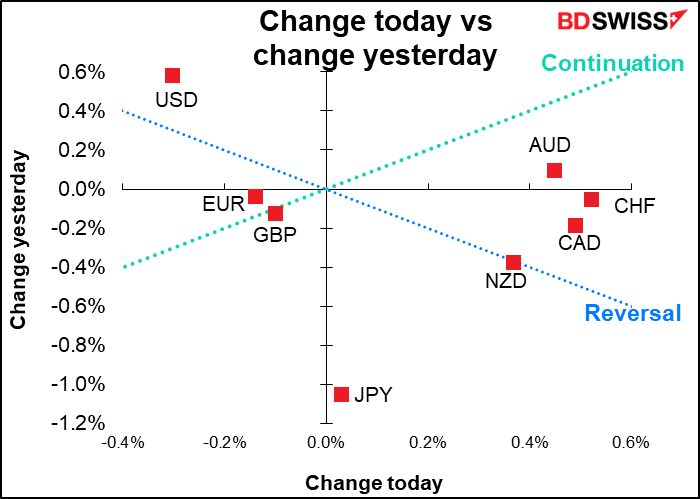 But it’s not. On the contrary there’s a positive correlation between USD/CHF and USD/CAD, meaning they both tend to move up together, albeit not 100%. The correlation recently has been somewhat greater than average but it’s still far from perfect. 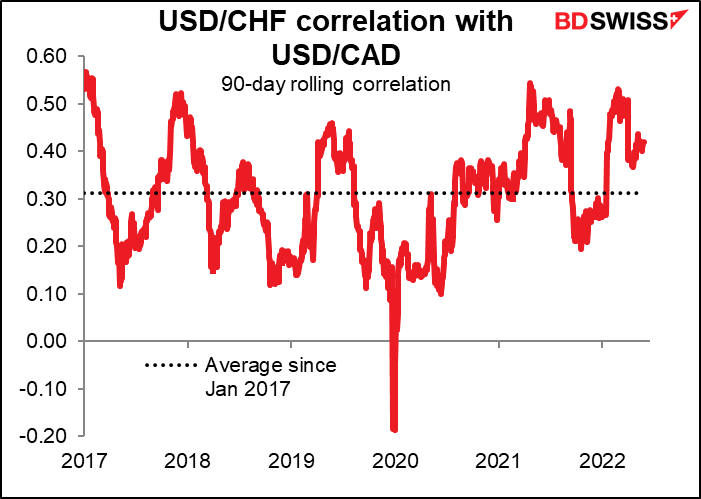 Same with USD/CHF and AUD/USD, although of course the correlation is going to be negative, since appreciation means the two pairs move in opposite directions. 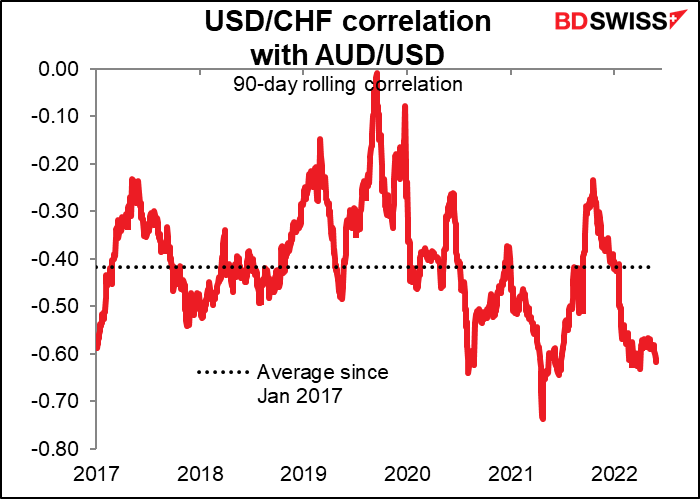 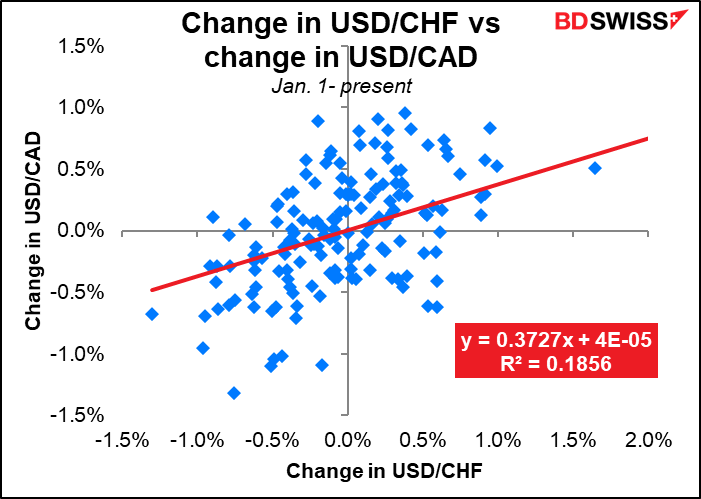 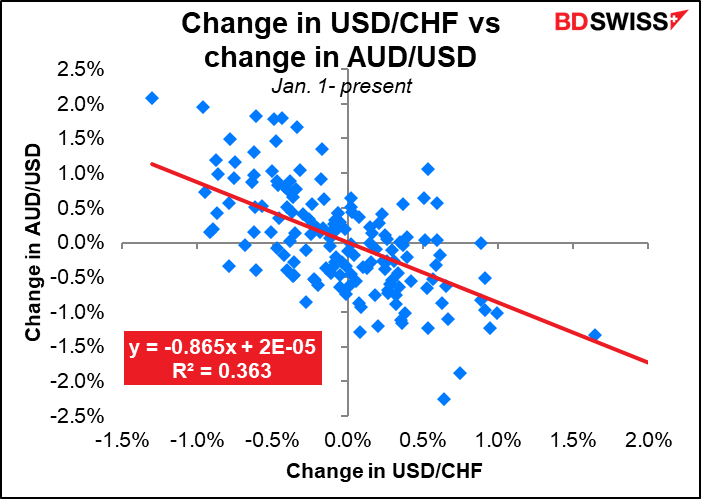 I wondered: is this just because of the movement of USD? When I ran the same exercise for CAD vs EUR, the results were the same: these currencies normally move together. 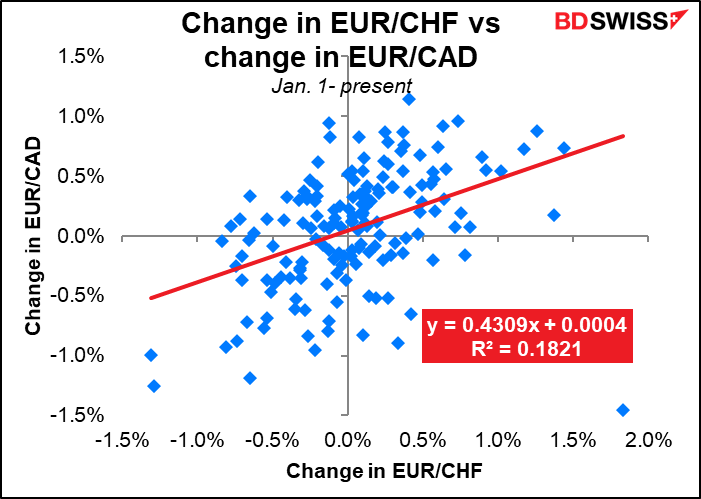 However EUR/CHF and AUD/EUR are a different story. The correlation there is normally positive, meaning that the two currencies do indeed move in opposite directions (EUR/CHF moving up = CHF weakening, AUD/EUR moving up = AUD strengthening). Sometimes though the relationship is negative, sometimes very negative, meaning that CHF and AUD are moving in the same direction. That’s tended to be the case this year. 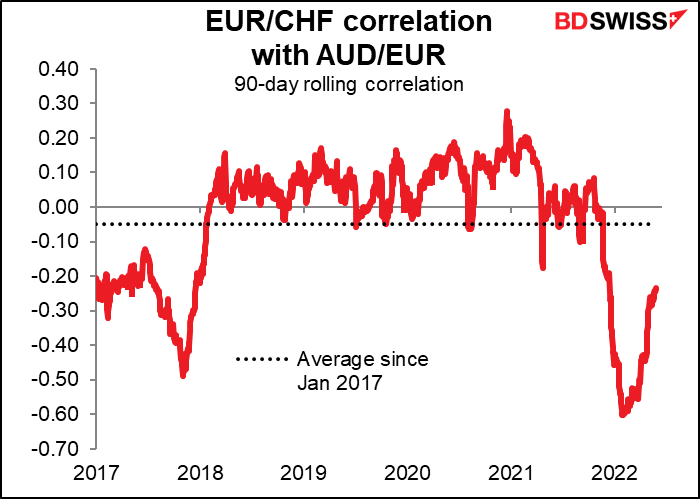 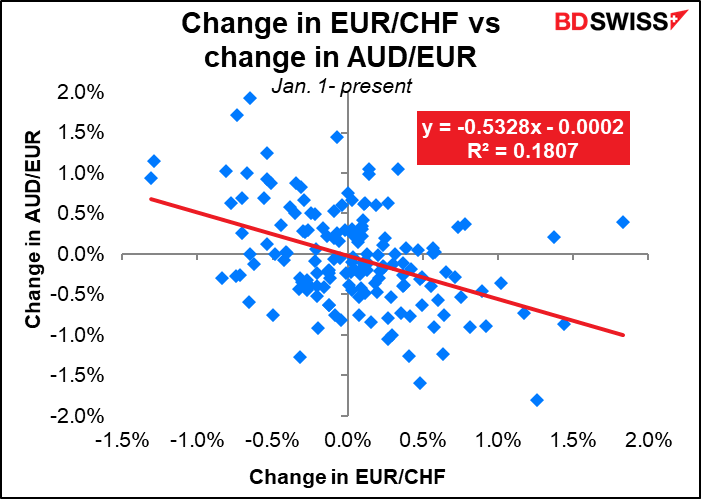 So what we see is that while currencies may be divided into “risk-on” currencies and “risk off” currencies, the distinction doesn’t always hold every day.

As for the “why” in today’s moves…with stock markets up and oil up 1.2%, we don’t need to linger very long on why CAD and AUD are higher and USD is lower – that’s the typical “risk-on” pattern. For CHF…I’d guess that that’s related to the continued problems in the Eurozone. The poor outlook for the Eurozone economy has made EUR into an attractive funding currency during risk-on periods. People selling EUR is likely to push CHF higher.

I was going to say it’s because rising electricity prices are putting next year’s Eurozone economy into doubt, but Swiss 1-year forward electricity prices have recently begun rising even faster than Germany’s! So that explanation doesn’t fly. Although a worsening inflation outlook in Switzerland would tend to be particularly positive for CHF because the Swiss National Bank uses currency appreciation more than interest rates to control inflation. 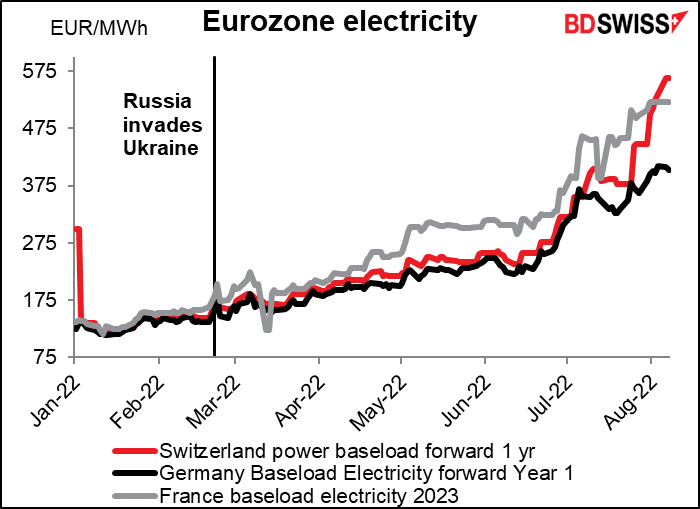 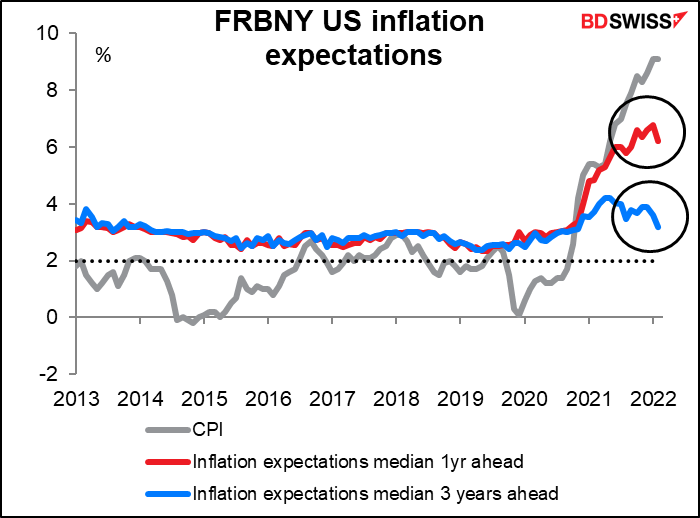 Big news in US politics! The FBI raided The Former Guy’s (TFG) home in Florida and even opened up his safe while tryiing to find out what documents he took with him when he left the White House. According to 18 U.S. Code § 2071 – Concealment, removal, or mutilation generally, anyone who takes any official records or documents “shall be fined under this title or imprisoned not more than three years, or both.” Perhaps even more importantly, this person “shall forfeit his office and be disqualified from holding any office under the United States.” This little brouhaha about 15 boxes of documents found at Mar-a-Largo is more than just a footnote in history – it may well disqualify He Who Must Not Be Named from running for President again (although there’s some debate about whether this law applies to the president, whose qualifications are set out in the Constitution.) Personally I’d love to see him run – if President Biden can beat him once, he can beat him again. 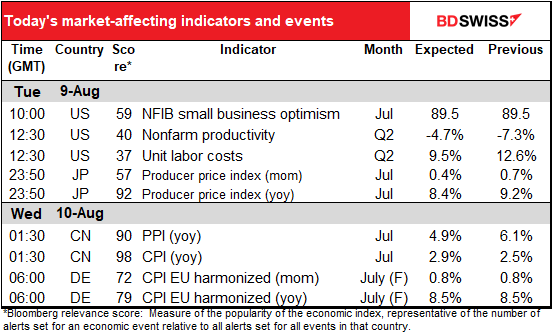 Another light day insofar as indicators are concerned. No European indicators and the US ones are second-tier at best.

The National Federation of Independent Business (NFIB) survey of small businesses is expected to show optimism stable from the previous month. The hiring index, which is probably more important, is already out – it turned up a bit. 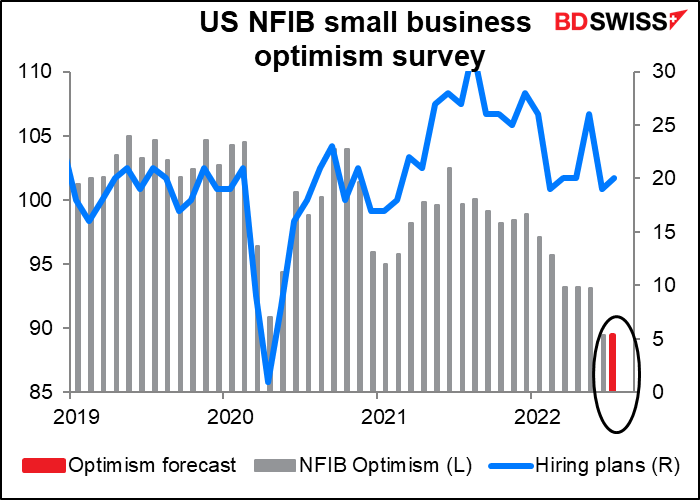 What’s interesting here is that while their hiring plans have moderated, “job openings hard to fill” is still near a record high. As I said yesterday, the labor market is saying “nice try!” to the Fed’s attempt to get the demand for labor more in line with the supply. 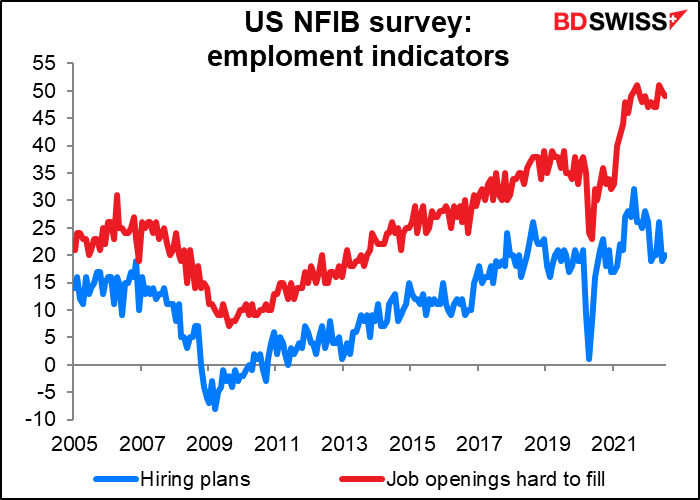 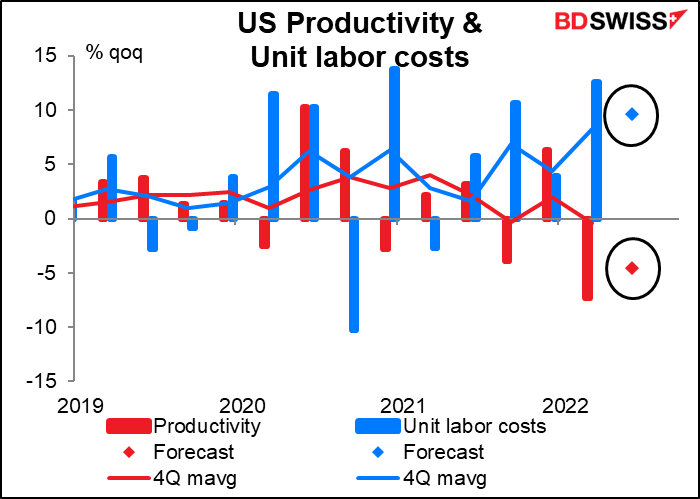 Overnight, Japan announces its producer price index (PPI). The growth rate is expected to slow notably, probably because of lower energy prices. This may confirm in the minds of the Bank of Japan’s Policy Board that they shouldn’t be in any hurry to join the rest of the world in hiking rates because who knows? Inflation is barely over 2% now, it might come back down in the not-so-distant future.  JPY- 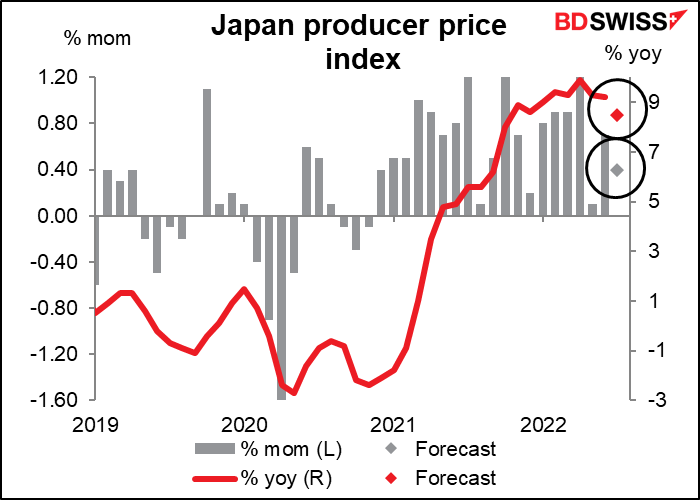 China also releases its inflation data. The consumer price index (CPI) is dominated by domestic food prices and so has little international implications. The PPI however is effectively China’s export prices, which in turn are many countries’ imported manufactured goods prices. It therefore is quite important internationally. And it’s expected to come down a lot. That’s a good sign for global inflation. 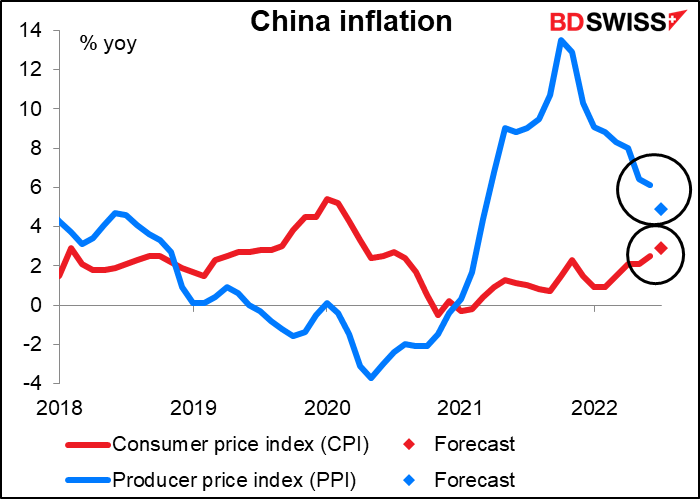 Then Wednesday morning as the day begins, Germany will release the final version of its CPI for July. The CPI hit a record high 8.7% yoy in May, in July it was slightly lower at 8.5% yoy. Will it be revised? Tune in and find out! 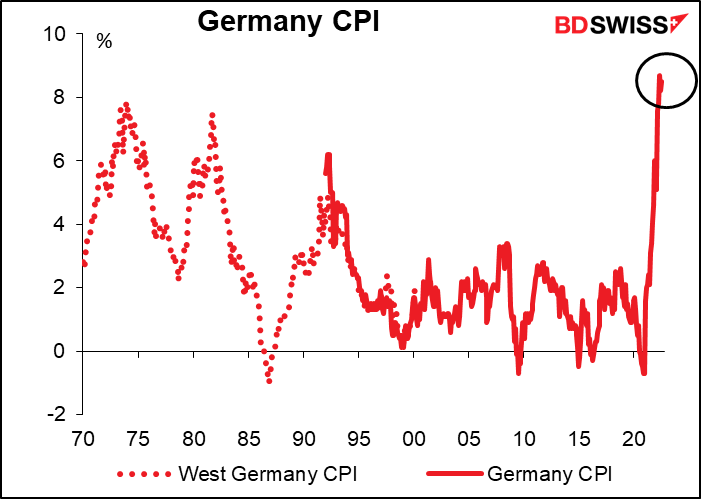 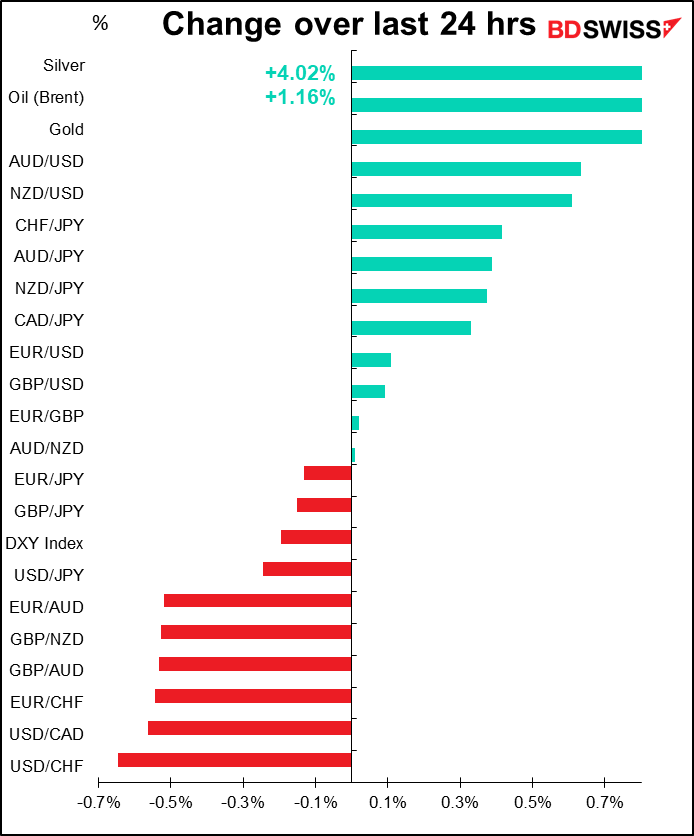 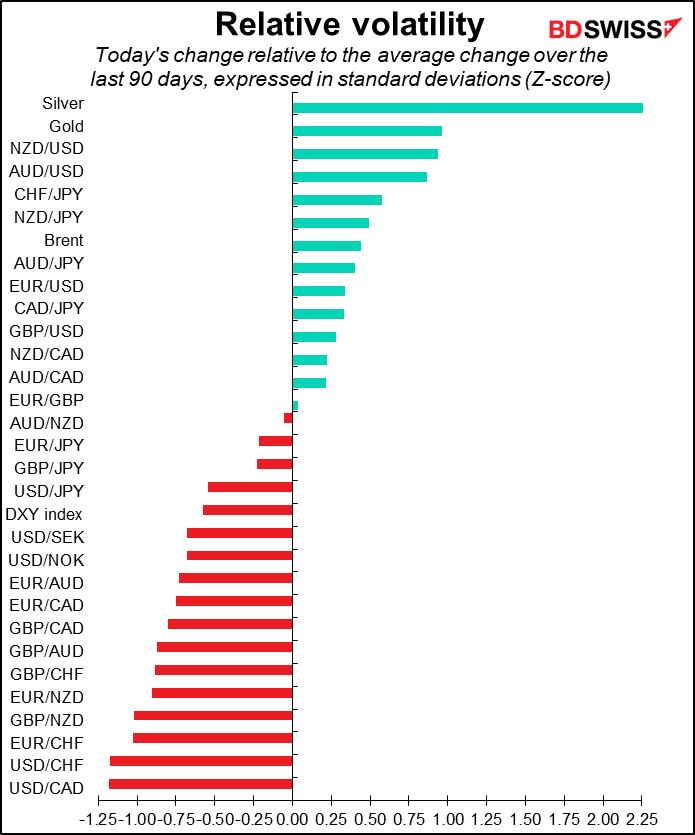