Bitcoin is up 3% over 24 hours to $43,500. Last night, the benchmark cryptocurrency was down to $41K, where it attracted demand from buyers on the decline. At this point, buyers are starting to buy back BTC quickly, which gives some hope.

The coin gets strong support on declines in the $40K area. Over the past month, Bitcoin has beat off attempts by bears in this area 5 times. Nevertheless, increased seller intensity may still play against Bitcoin. Now BTC finally offset the “Chinese news factor” and further news from the Celestial Empire is likely to have less and less influence on the price dynamics of the coin.

The Crypto Fear & Greed Index for Bitcoin and major cryptocurrencies is at 20, which corresponds to the “extreme fear” mode. This is a bullish buy signal on a rebound for the first cryptocurrency and this market in general. The RSI index for BTCUSD on the daily chart is in the neutral zone, showing moderate growth and indicating that there is room for growth. 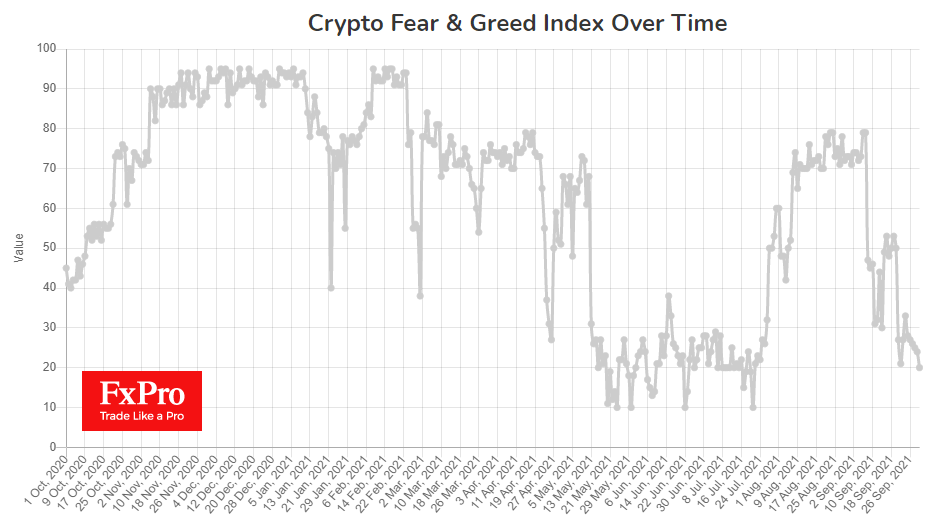 Contrary to outside pressures, El Salvador is moving forward with the incorporation of Bitcoin into the economy. The country’s president published a video of the installation of volcano-powered ASICs. Clearly, the country’s government is going ‘all in’ in its experiment on citizens and the economy. News of such nature, if not causing powerful buying impulses, certainly maintains a positive mood among participants of the crypto market.

Nevertheless, if the experiment fails miserably, we may well see an increase in the negative impact on Bitcoin and then on the entire crypto sector. It is difficult to unequivocally condemn and advocate for such a project. It is likely that the success of such an event could be even more dangerous than the failure, as it would cause several countries to follow El Salvador’s example. Globally, there are many countries unhappy with the current world order, the role of the Dollar, and the IMF, but at this stage, betting on Bitcoin is like betting everything “on the red” in a casino.

China is doing exactly the opposite, banning everything related to cryptocurrencies. It has become known that Bitmain, a Chinese manufacturer of Bitcoin mining ASICs, has stopped selling in their country. This is very revealing news, as it is obvious that the Chinese authorities, after weighing all the pros and cons, came to a total prohibitionist position. The authorities of Western countries are usually against such methods, but in practice, they often copy Beijing’s position, albeit in a different kind of wrapper. It is hard to say what size the crypto market will be allowed to grow to, but it is obvious that Chinese-type regulation is getting closer.