Treasury yields rose on expectations of higher inflation and monetary policy tightening by the US Federal Reserve. Jerome Powell has made it abundantly clear on a number of occasions that rates will not be lifted until 2023. GDP, inflation and the labor market must all reach target levels in order for the regulator to gear up for a rate hike cycle. 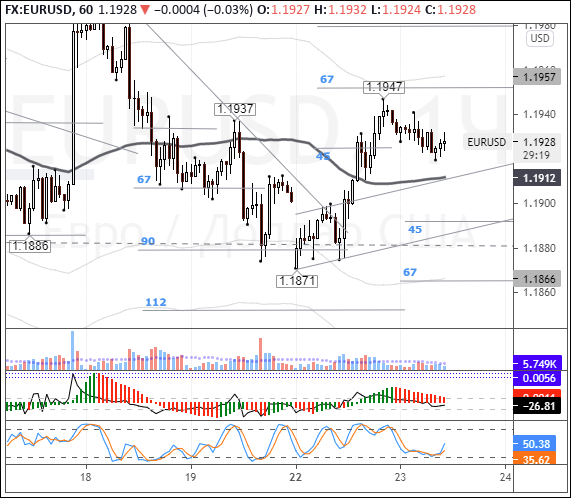 At the time of writing, the euro was trading at 1.1927. In Asian trading, major currencies are in the red, with the exception of the yen. Today’s worst performing currencies are the New Zealand dollar (-1.22%) and the Australian dollar (-0.77%) as risk aversion sets in. The 10-year bond yield dropped to 1.665%. All major currencies look set to strengthen against the greenback, while risk-sensitive assets are on the back foot.

Risk aversion is being driven by news about new sanctions. The US, EU, UK and Canada have imposed sanctions on Chinese officials in response to Beijing's human rights violations in Xinjiang province. These countries are attempting to hold Beijing accountable for the mass detentions of Muslim Uyghurs in northwest China, where the US believes China is committing genocide. The kiwi also came under pressure from a decision by the New Zealand government to counter a rampant rise in housing prices.

EURUSD price action corrected to 1.1919 after hitting a high of 1.1947. If the Chinese sanctions are placed on the back burner for a while, then buyers will get a chance to retrace to the 1.1980 level. On the way up, buyers will encounter interim resistance at 1.1952. If they allow sellers to push the price action below 1.1910, then bearish sentiment will make a comeback. In this case, euro selling will pick up with renewed impetus. Powell has nothing new to say in his speeches, so his narrative will not be able to move the market.