EURUSD: euro attempts to bounce off 1.20

The EURUSD pair fell 0.07% to 1.2004 on Wednesday, May 5. By contrast, the New Zealand dollar, the Australian dollar and sterling closed in positive territory. The kiwi strengthened on labor market data, but failed to move the whole market. The single currency came under pressure from a pullback in the EURGBP cross pair.

The greenback rose during the previous session on remarks from the US Treasury Secretary Janet Yellen in an interview with The Atlantic that interest rates might need to be raised to prevent the American economy from overheating. She later said that she was neither predicting nor recommending that the Federal Reserve raise interest rates. The FX market regained its footing after that.

In line with yesterday’s ADP report, the number of US private sector jobs increased by 742,000 in April. Companies boosted payrolls, but the reading came in below the median forecast of 800,000.

A report from the Institute for Supply Management showed that growth in the US services sector unexpectedly decelerated in April. The services PMI dropped to 62.7 in April after jumping to 63.7 in the previous month (vs. 64.3 expected). 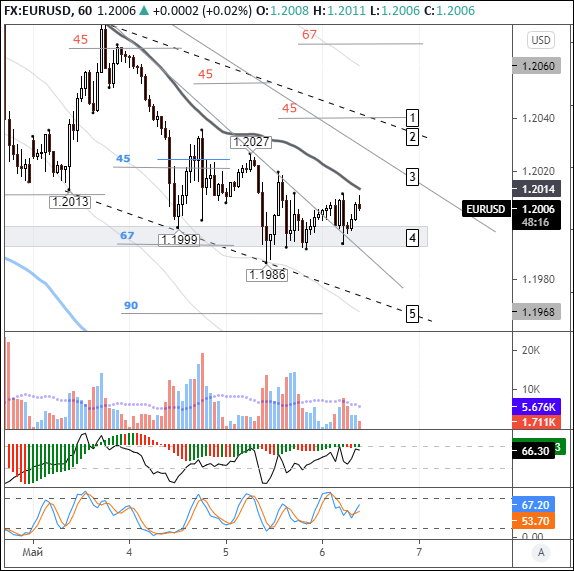 At the time of writing, the euro was trading at 1.2007. Despite a decline to 1.1986, the 1.20 support level is holding back the euro bears. The bulls are drawing strength from the fixed-income market, where the 10-year UST yield has retreated to 1.575%.

Today, traders are looking ahead to a BoE meeting, elections in Scotland, as well as Friday's non-farm payrolls report. It makes sense to steer clear of sterling until next week in order to sidestep sharp multidirectional price fluctuations.

The EURUSD pair looks set for growth. Heavy buying is not to be expected ahead of the day’s key macro news. This is possible under one scenario, i.e. if long-duration North American bonds start to push higher. If this happens, sellers will start closing out shorts in the euro, which would jolt the key pair into action.

Bottom line: in Asian trading, the dollar has been showing choppy performance against major currencies. EURUSD is trading in the range of 1.1990-1.2018. The psychologically important 1.20 level acts as the key support.

As for today’s key data points, we advise players to watch for the BoE meeting. EURUSD dynamics will also be driven by 10-year USTs. If the yield retraces to 1.532, we can expect the euro to recover to 1.2030.