Kiwi rebounds, propelling other currencies into the green

The aussie and kiwi dollars set the tone for market participants. The Australian dollar fell to a nine-month low of 0.7242 against the US dollar after minutes from the RBA meeting showed that the central bank will stick to its guns and not reduce the scope of bond purchases. The regulator will take additional measures if the pandemic containment measures threaten a deeper economic downturn.

The New Zealand dollar fell to its lowest level in three weeks after the country's first case of COVID-19 since February was detected, prompting the government to impose a snap lockdown. In the upshot, the NZDUSD pair tumbled to 0.6900.

Traders brushed off a weak US retail sales print on the back of risk aversion, focusing on strong industrial production data. The rise in the 10-year US Treasury yields further supported the dollar against peer currencies.

Fed Chair Powell’s speech had no impact on currency pairs. He spoke at a question-and-answer session with students and teachers, did not comment on what is next for central bank policy, and did not make any specific remarks about the growth and risks associated with the spread of the Delta variant. 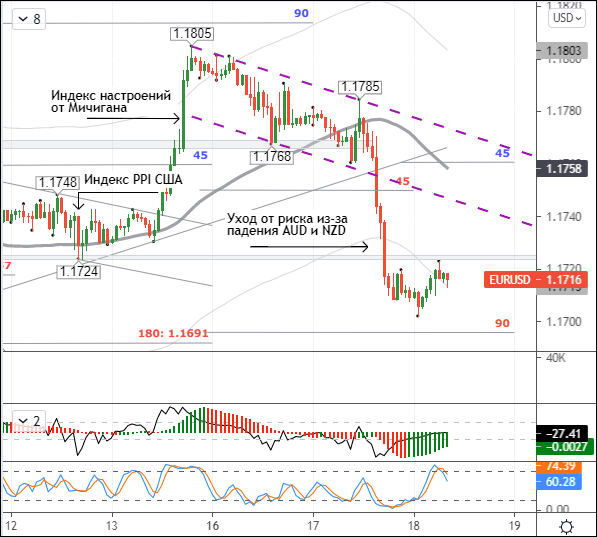 By the time of writing, the euro was trading at 1.1714. Major currencies have been trading in positive territory, except for the yen and franc. Corrective movement can be seen in these two currencies after two days of strengthening amid risk-off sentiment.

This morning, the focus was back on the kiwi dollar, which retraced to 0.6933 against the US currency after the RBZN meeting. The Monetary Policy Committee retained the current stimulatory level of monetary settings, keeping the Official Cash Rate (OCR) at 0.25%. The decision was made in the context of the government's imposition of Level 4 COVID restrictions on activity across New Zealand.

At a press conference, RBNZ Governor Adrian Orr said that less monetary stimulus is needed and the central bank is determined to cut stimulus. The bulls bought into the dip, pushing the kiwi up to an intraday high of 0.6951. The aussie dollar also tested new lows and then reversed to new highs.

The overall picture for major pairs points to an extension of the ongoing correction. A wildcard is the FOMC minutes, which will be released at 18:00 GMT. Fed Chair Powell delivered his speech to students and teachers, did not address monetary policy, so uncertainty continues to prevail on the market today. The minutes are a key event for the FX market amid of the patchy macro data that has been coming out of the US. For this reason, I would rather not hazard a guess as to which way the price action might move today ahead of the minutes and after the release.

Given the magnitude of today’s pullback in the AUDUSD and NZDUSD pairs, we believe EURUSD has room for a leg down to 1.1605. However, if major pairs revert to an upward correction, EURUSD could see two targets: 1.1740 and 1.1760. We await the minutes for clarity on market trends going forward.