After the release of US macro data, the dollar index dropped to 92.15. Sellers drove down the dollar ahead of the NFP report amid heightened demand for risk assets. The report has not yet been released, and investors are hopeful that the Fed will not rush into winding down QE stimulus.

10:50-11:30: Markit services and composite PMIs will be released in France, Germany, the Eurozone and the UK (August)

Strengthening of the euro is underpinned by yesterday’s strong Eurozone PPI print for July. There was talk that the ECB needs to start cutting bond purchases from $80 bln to $50 bln. The aussie and the kiwi dollars are firming amid heightened risk appetite, brushing off the surge in Covid-19 infections in Australia and New Zealand.

The DXY is trading at lows ahead of today’s NFP report. The number of jobs is expected to increase by 750k, but after yesterday’s tepid ADP data, the NFP readout could fall short of expectations.

Major currencies are trading in positive territory, except for the Japanese yen. By the time of writing, the euro was trading at 1.1874. The key pair has been in a bullish trend for 10 days, while the pullbacks ranged from 25 to 50 pips.

Growth stopped at the 180-degree angle. Euro crosses show mixed dynamics (not in favor of the euro). A bearish divergence has shaped up between the AO indicator and the price. For this reason, the odds are still strong that bulls will start taking profit on long positions.

Bottom line: the euro closed higher on Thursday amid ongoing demand for risk-sensitive assets. Traders are betting that the Fed will hold off on QE tapering, with all eyes on the August labor report. In line with the median forecast, the US economy added 750k jobs.

The euro has been moving higher against the dollar for 10 days, so a bearish divergence has formed on the hourly chart. The risk of profit taking on long positions has increased. If the NFP report lets down the market, the euro could spike to a 7-day high. 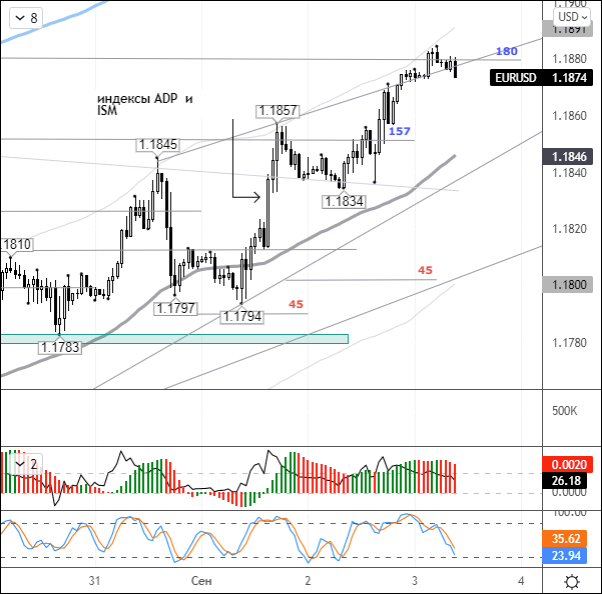