Euro rises ahead of US CPI data

The EURUSD pair ticked down 0.01%, to $1.1811 on Monday, September 13. During European trading, price action fell to 1.1770 due to political news on the elections in Germany, as well as overall strengthening of the US currency.

The DXY index hit a new high at 92.88 as investors expect the Fed to dial back bond purchases earlier than expected. The US 10-year Treasury yield fell slightly and closed at 1.3240.

The dollar failed to hold recent highs as profit-taking broke out ahead of key macro data. EURUSD rebounded from 1.1770 and rallied to 1.1817, reaching a new daily high. 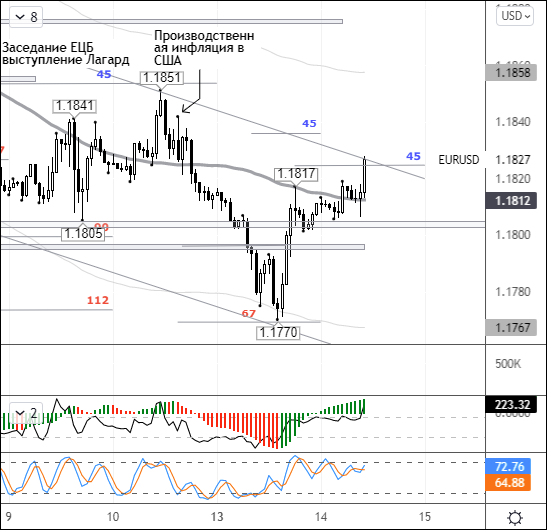 Major currencies have been showing mixed performance in Asian trading. The steepest losses are seen in the Australian dollar (-0.42%), with selling caused by RBA Governor Lowe’s comments. AUDUSD fell to 0.7331 as the central bank will stop buying QE bonds in 2022 and interest rates will not change until 2024 due to sluggish wage growth.

Other currencies reacted sluggishly to the decline in the aussie. The pound and euro are trading in positive territory, attempting to move as high as possible ahead of the US inflation report. The August CPI might impact the expectations of the US central bank. The September FOMC meeting is scheduled for next week. The data will be released at 12:30 GMT, and all eyes will be on this data.

By the time of writing, the euro was trading at 1.1826. Buyers have completely pared yesterday's losses. Price action is hovering near the 55-day SMA (balance line). Buying activity is low-key as market participants await the release of the US inflation report. Resistance is located at 1.1825.

In line with the DXY index, a double top pattern shaped up on the hourly TF, and a pinbar formed on the daily TF. These patterns point to a reversal, so if the CPI data falls short of expectations, we can expect to see a pullback TO 92.31 in the DXY and a leg up to 1.1875 in the EURUSD pair. Support is pegged in the range of 1.1800-1.1805.