The EURUSD pair dropped 0.20% to 1.1696 on Monday, September 27. The single currency brushed aside the outcome of Germany’s federal election. ECB president Christine Lagarde, addressing a hearing of the Committee on Economic and Monetary Affairs of the European Parliament, said that the PEPP program is effective, while the uptrend in inflation is transitory.

During the European session, the euro fell to 1.1685 and hovered around the 1.1700 handle until the close. The dollar drew support from a steepening yield curve ahead of multiple Fed speakers this week who are bolstering expectations for tapering of asset purchases by year-end. 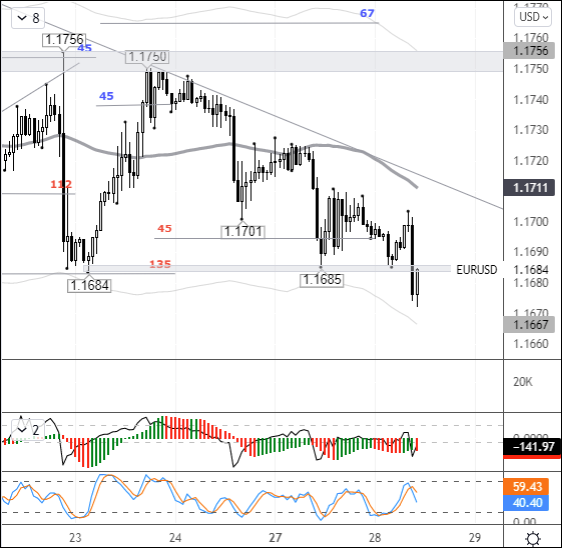 In Asian trading, major currencies have been moving in positive territory. However, everything has turned red since the opening of the European session. The DXY index breached resistance at 92.53, whereas the euro broke through support at 1.1685. The US 10-year Treasury yield reached 1.546% on the back of heightened tapering expectations.

Investors apparently decided to stay in the dollar ahead of testimonies by Fed Chair Jerome Powell and Treasury Secretary Janet Yellen before Congress. Michelle Bowman and Rafael Bostic will also speak later today. Virtually all FOMC members have spoken in favor of phasing out bond purchases.

Sharp declines in the key pair have been seen since the Fed’s last meeting. Price action recovers for more than 16 hours and then all gains are erased within the span of 2-3 hours. Since the opening of the European session, the euro has broken through the 1.1685 support level, dropping as low as 1.1672. Sellers pulled out protective stops for long positions, as there is a mild correction in the main pairs.

Two days are left until the quarterly and monthly candles close. Buyers are showing weakness. In light of this trend, the DXY could climb to 95.65 in Q4.

A close of the hourly candlestick and daily candlestick above 1.1690 would flag a false breakout. If pressure increases on the single currency, buyers will have to retreat to the 1.160 handle to build up new impetus. Stay tuned for Powell and Yellen's testimonies.