Weak macro sends euro back to 1.16

— Cos said that supply network bottlenecks and higher commodity prices are negatively impacting the pace of economic recovery.

The EURUSD pair slipped 0.30% to $1.1608 on Monday, October 25. The pair opened Asian trading to the upside, but the euro came under pressure after German macro data was released. The country’s three IFO indices (expectations, current conditions, and business climate indices) fell short of the previous readings and median estimates.

Later in the day, a member of the Governing Council of the European Central Bank and Governor of the Bank of Spain, Pablo Hernández de Cos, spoke. He said supply chain problems and rising raw material prices are negatively affecting the pace of economic recovery. Inflation is temporary and monetary policy will persist for a long time.

Throughout the month, ECB representatives have been talking about inflation, claiming that its upward spiral is temporary and there is no need to revise monetary policy. The key pair declined to 1.1591, and is currently consolidating in the range of 1.1591-1.1617. Market participants await US 3Q GDP, as well as the ECB meeting and Christine Lagarde's press conference (Thursday). 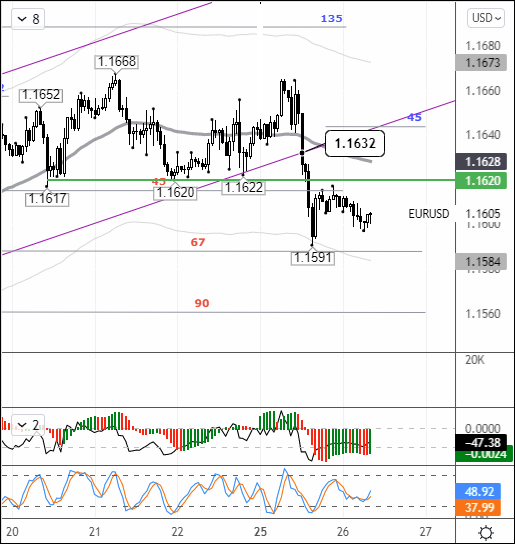 The single currency remains under pressure after yesterday's decline. In cross pairs, the euro is being bought only for the yen and franc. Therefore, buyers are not drawing support from allies.

Today’s economic calendar is an empty slate for the euro. Despite weakness in the euro, it makes sense to watch for the dynamics of US10Y yields and the main EURGBP cross.

On Monday, the EURGBP pair retraced to the 0.8420 support level. The cross has the ability to bounce sharply, so if it turns upward again, it will push the EURUSD pair up to 1.1640. If the dollar continues to strengthen ahead of the Fed’s next meeting, the euro will be forced to retrace to 1.1500-1.1525.

Sterling is also in an ambiguous situation, trading near the 1.3745 support level. If breached, the road to 1.3670 will be open for sellers. The direction of the UST10Y yield will be decisive for a number of main FX pairs.