EURUSD fell 0.63% to 1.2075 on Friday, January 15. The euro started to trend lower right from the opening of the Asian session and drifted south until the close. The yen and the dollar were defensive assets. The drop in the single currency was partially offset by a rebound in the EURGBP cross, which, after an eight-day downtrend, found support at 0.8870. In the upshot, sterling slipped 0.79% to 1.3576.

Market sentiment was negatively impacted by a ramping up of lockdown measures in France and Germany, as well as a resurgence of Covid-19 cases in China. Investors were also not satisfied with the scope of Biden's coronavirus rescue package, arguing that $1.9 trln is not enough given the country’s sluggish economic performance.

That said, the onset of risk aversion was likely more related to the upcoming inauguration of Joe Biden. The Capitol in Washington has been cordoned off by a non-scalable chain-link fence, while access roads have been sealed off by concrete blocks. A military cordon consisting of 25,000 National Guard troops stretches to residential areas. Apparently, such all-out security measures are being taken for a reason. 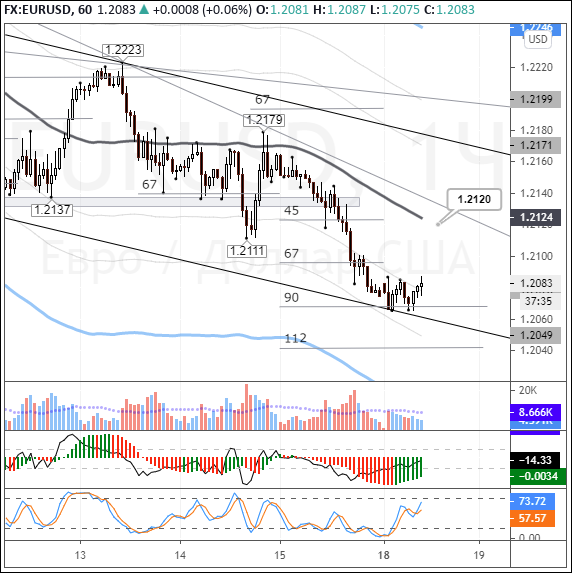 Major currencies have been trending lower in Asian trading. The steepest losses have been seen by the Canadian dollar (-0.34%). The single currency is marginally higher ( 0.02%). Although Chinese macro data fell short of expectations, the Chinese economy ended 2020 with fairly strong performance. Q4 GDP expanded by 6.5% compared to the year-earlier period.

At the time of writing, the euro was trading at 1.2080. Sterling and the euro have been showing multidirectional dynamics. The single currency entered positive territory due to a rebound in the EURGBP cross. The FX market could see subdued volumes until Tuesday due to a statutory holiday stateside.

It was good to see today’s move against the trend seen on Friday. All the prerequisite have been met, but there are fears that the key pair will continue to decline amid the political crisis in Italy as well as lockdown protests across Europe.

The EURUSD pair correlates well with the 10-year Italy-Germany bond yield differential. Its decline is putting pressure on the euro as Italy’s bond yield spread is widening. The spread is on the rise today, setting the stage for the euro to rebound. Virtually all crosses are on the side of euro buyers. If the bulls can bounce off 1.2065, then a leg up to 1.2120 could be in the cards.