The EURUSD pair traded in the red on Tuesday, February 2, dipping 0.13% to 1.2043. To remind, the single currency has been facing headwinds due to the slow rollout of vaccination campaigns in Europe compared to the UK and the US, as well as recent euro-unfriendly statements by Christine Lagarde and Klaas Knot. They voiced dissatisfaction with the euro’s strength and reminded market participants about the tools the regulator could use to weaken the European currency.

Eurozone GDP contracted in Q420. According to the first estimate, the bloc’s GDP slipped 0.7% in quarterly terms and plunged 5.1% in annual terms. Experts expected the annual reading to decline by 5.4%, and by 0.9% on a quarterly basis.

The single currency fell to 1.2012 during the American session. The price action mustered a rebound before the close, but this could not turn market sentiment around. 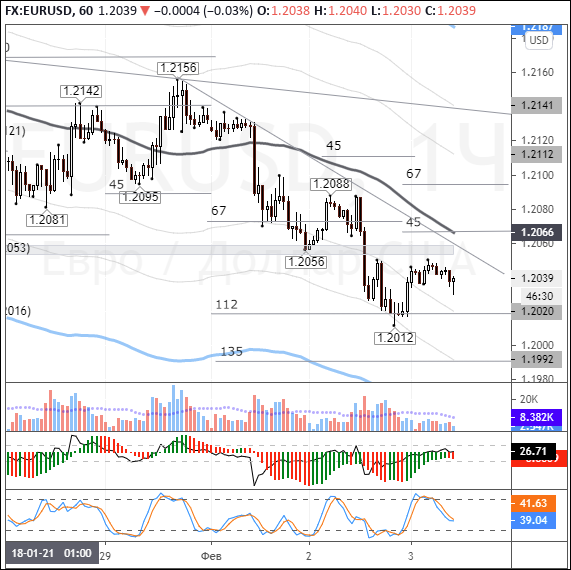 The key pair halted its decline at the 112th degree of the Gann angle. This is a strong support level and the market is abuzz with speculation that it will be able to hold sellers above 1.2020 for the time being.

The space between the 112-degree and the 135-degree angles is a reversal zone. Right now, there is one important issue to consider. Sellers have broken through the horizontal level of 1.2055 near this zone. For this reason, the risk remains of another leg down to 1.1915. Interim support levels will be at 1.1968 and 1.1991.

As for the key macro releases, players are advised to watch for Eurozone PMI readings, as well as the ADP report stateside, which should drop a hint about what to expect on Friday when the January non-farm payrolls report comes out.

Rising euro crosses point to buy-side strength, so we think the 1.2010-1.2064 side trend looks like an interesting range.