The EURUSD pair logged losses on Tuesday, March 23, slipping 0.70% to 1.1848. Yesterday’s trading session turned out to be unusual. The dollar moved higher across the board, including Asian trading, as 10-year US treasury yields pulled back to 1.59%. The US fixed income market has lent support to the dollar for several weeks, and when yields began to decline, investors quickly shifted their attention to other events.

The euro fell back to 1.1834. Selling was sparked by a third wave of coronavirus in Europe. Germany has extended the lockdown until April 18, while France introduced a new 4-week quarantine in Paris and several other regions last Friday.

The euro began to decline right after the Asian session opened, and losses deepened during European trading. Risk aversion was triggered by sanctions against China and the decision of the New Zealand government to curb speculation in the housing market. The kiwi fell 2.18% on the day against the US dollar, dragging the aussie down with it, and in tandem they prompted traders to close long positions in major currencies. Meanwhile, FX players shrugged off the rise in long-dated US bonds. 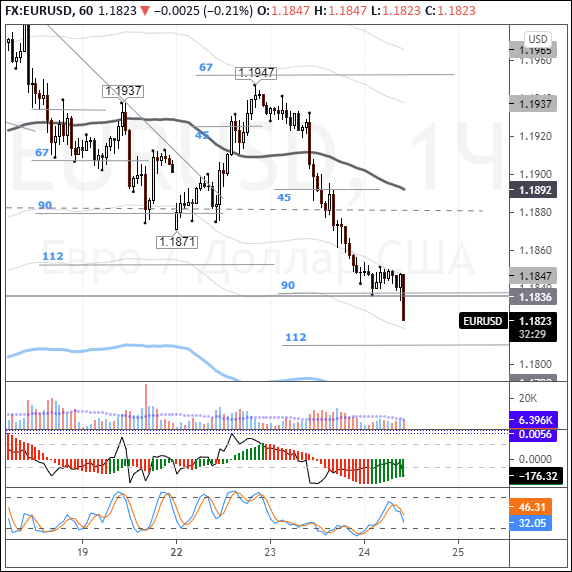 At the time of writing, the euro was changing hands at 1.1824. The 10-year UST yield stands at 1.61%. The New Zealand and Australian dollars remain under pressure, topping the list of today’s underperforming currencies, both down 0.23%. When these antipodean currencies depreciate the most against the US dollar, investors pile into defensive assets.

The euro is hovering above the 90-degree Gann angle. This position almost coincides with the horizontal level from the 1.1836 low (March 9, 2020). The situation in Europe remains tense due to the third wave of the pandemic amid sluggish vaccine rollout. Many industrial concerns are on the verge of bankruptcy, even as investors start looking ahead to the US economic recovery.

Looking at the daily chart, buyers missed their chance as the scales are tilted with a sell-side bias. The external backdrop shows a similar picture. The closest level for a decline is 1.1770. If the fall accelerates as stop losses are triggered, sellers will set their sights on 1.1640. Positive vaccine news is needed to stem the downtrend.