Yellen said interest rates may have to increase somewhat in order to keep the US economy from overheating. She then promptly backpedaled by saying she did not forecast an increase in interest rates to curb inflation.

As a former Fed Chair, Yellen knows Powell will not pay any attention to her. She suggested, but did not recommend, that rates be raised. Indeed, this whole tempest in a teapot boiled down to a misunderstanding. 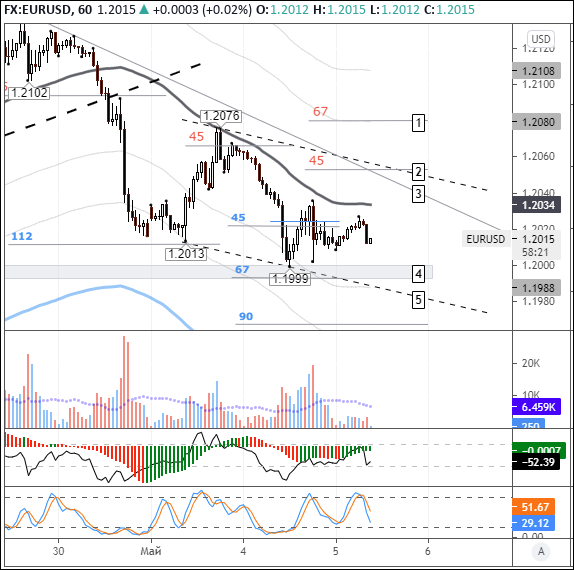 In Asian trading, the US dollar is losing ground to its competitors. Topping the leader board are the New Zealand dollar ( 0.43%) and the Australian dollar ( 0.34%).

The kiwi moved higher following the release of a strong jobs report as New Zealand's Q1 employment report showed more jobs added than expected. The unemployment rate was lower despite an increase in the participation rate. Unemployment fell to 4.7% compared to the median forecast and the previous reading of 4.9%. Other currencies tracked the kiwi upward.

At the time of writing, the euro was trading at 1.2013. Treasury yields are on the rise and are holding back upside in EURUSD. The kiwi dollar is also paring morning gains. If the dollar goes on the offensive across the board in European trading, the bears will attempt to take out the 1.200 support level (4) in order to reach stop losses and ride them down to the lower bound of the 1.1985 channel (5).

Today FX players will be focused on April service sector PMIs out of France, Germany, the Eurozone and the US. The key trigger for currencies is still 10-year UST yields. As yields go up, the euro depreciates, and conversely, the single currency appreciates when yields narrow.

We would also advise market participants to keep a close eye on the EURGBP cross pair. The euro is showing weakness against sterling, so the bears are just waiting for the cross to drop to 0.8614 in order to break through the psychologically important 1.20 level.

The euro is trading near the psychologically important 1.20 level in anticipation of European macro data. If the readings outpace the consensus figures, there is still a chance we could see a rebound to 1.2035. Under an alternative scenario, the bears win the upper hand and prepare to break through the 1.20 mark.