Euro tanks ahead of payrolls, Lagarde and Powell speeches

The EURUSD pair sank 0.68% to 1.2127 on Thursday, June 4. The pair plunged during the North American trading session after robust US macro data was released. Employment and business services sector data came in stronger than expected. The USD strengthened across the board on the FX market. In addition, the 10YUST yield widened to 1.632% from 1.591%

In addition, initial jobless claims (including seasonal fluctuations) totaled 385,000 for the week ending May 29, down from 405,000 in the previous week and a pandemic-era low (since mid-March 2020).

After this slew of stellar data, traders started buying into the dollar, with the conviction that the today’s NFP figure will exceed the baseline forecast of 650,000 and lend support to the greenback. 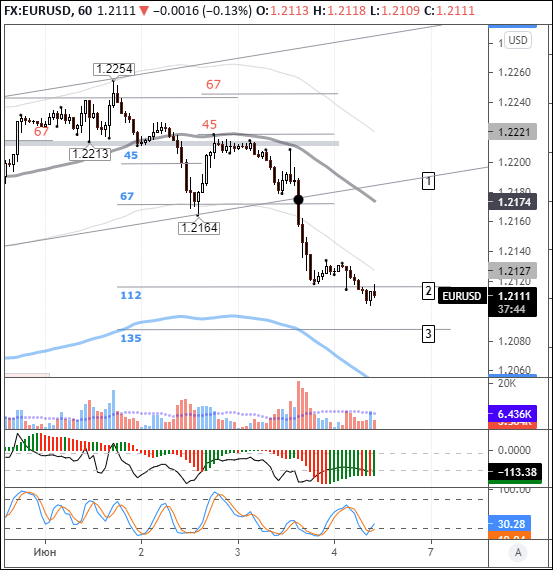 The euro slipped to 1.2118 during the North American trading session. Asian speculators pushed the price action to a low of 1.2104. At the time of writing, the euro was trading at 1.2113.

After the dollar’s bull run yesterday, all eyes are on US payrolls. The private sector (ADP) and jobless claims reports make players hopeful that payrolls will stage a show of strength.

If the jobs report overshoots the 650k baseline forecast and the unemployment rate decreases, the dollar will continue to move higher against peer currencies. Meanwhile, the euro could drop as low as 1.2050, depending on how the US10Y yield moves. However, if the yield does not move higher, the euro will experience an upward correction. The decline could be limited, as the upbeat data was already priced in yesterday. And if the headline number disappoints, the euro could retrace to 1.2180.

On the daily TF, after breaking through 1.2160, the scales are tilted to the sell side. With the downward correction gaining momentum, the immediate support level will be 1.2070, followed by 1.2005.

Uncertainty will be added by the speeches from ECB President Lagarde and Fed Chair Powell. They are scheduled to speak at 11:00 GMT ahead of payrolls. Given the magnitude of today’s events for the FX market, we advise players to stick to the sidelines heading into the weekend.

Bottom line: on Thursday, the euro tumbled on the back of stellar macro stateside. The 10Y Treasury yield jumped to 1.632% from 1.591%. Traders bought in the greenback on expectations that today’s NFP figures will exceed the baseline forecast of 650k and prop up the dollar. Uncertainty is added by speeches from ECB President Lagarde and Fed Chairman Powell. They are slated to speak at 11:00 GMT ahead of payrolls. Expect heighted volatility after 11:00 GMT, which will continue until the close of European trading.