In May, the non-farm payroll sector of the US economy added 559k new jobs, vs. the median consensus that called for 650k. Investors were disappointed by the headline figure, despite the improvement in other indicators such as a lower unemployment rate and higher average hourly wages.

As a result, the DXY and the 10Y Treasury yield sank on Friday, lending support to major currencies, and with the euro exchange rate retracing to 1.2185. 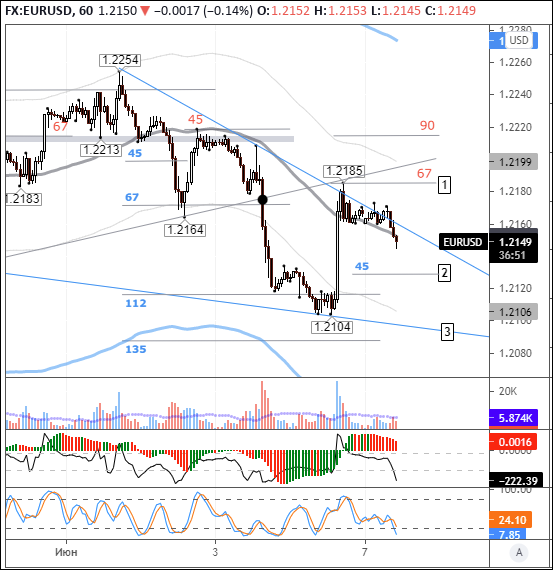 At the time of writing, the euro was trading at 1.2147. Major currencies entered negative territory near the European open. Asian market participants refused to extend the upward move that followed the release of the NFP report.

Factory orders in Germany fell by 0.2% in April compared to 1.0% projected growth, down from the prior 3.9%. This news did not put pressure on the euro. The key pair dropped to 1.2147 in line with the correction after Friday's gains. However, sterling took a hit as the EURGBP pair continues to trend higher.

The 10-year Treasury yield currently stands at 1.57% as market participants await fresh news. This week’s highlight for the euro will be Thursday’s ECB meeting and Christine Lagarde's press conference. No surprises are expected from the regulator, so unless traders alter their stance on Friday’s NFP report, the uptrend looks set to continue.

At this point, buyers will need to hold the 1.2130 level (45-degree angle, 2), as they did not manage a retracement to 1.2210 on Friday. Moving Average lines are pointing downward, implying that it would be easier for the euro bears to drag the price action down than for the bulls to push it up.

The pair is hovering on the balance line (55-day SMA), so unless the bulls make a move, the price action could drop to 1.2097 (3). In any case, it makes sense to monitor the dynamics of UST yields. If yields continue to rise in price, the single currency will track them higher.