Asian trading opened on a subdued note. The dollar tried to extend the rally, but ran into pushback from all major pairs. The first signs of a correction appear to be setting in. Major currencies are trading in positive territory. The kiwi dollar ( 0.46%) tops today’s leaderboard.

The price action bounced off 1.1847 (270-degree angle). At the time of writing, the euro was trading at 1.1878. The euro bulls will run into immediate resistance at 1.1890, which will need to be taken out as quickly as possible for the single currency to gain a foothold above 1.1900. Reversing the bearish trend will not be an uphill struggle. But keep your hand on the throttle, as the downturn in the dollar may pick up unexpectedly for everyone due to closure of long positions in the dollar ahead of Jerome Powell's congressional testimony. This event is scheduled for 21:00 (GMT 3) on Tuesday. Short stops are at 1.1930.

No market-driving news is on today’s macro agenda. Noise could come from Christine Lagarde’s speech (slated for 17:15, GMT 3). If the pressure intensifies, the euro bears will zero in on 1.1810-1.1820 as their assault range.

Bottom line: the US dollar has been strengthening for three days. The market has reacted aggressively to the FOMC’s new dot plot. US monetary policy is expected to be tightened only in 2023. But the picture could still shift dramatically in the interim. We advise FX players to take a breather so as to halt panic selling in major currencies. EURUSD trading tends to be emotionally charged and this may well be the case today, with Christine Lagarde set to speak this evening. If the pressure builds, the euro bears will target 1.1810-1.1820 as their attack range. 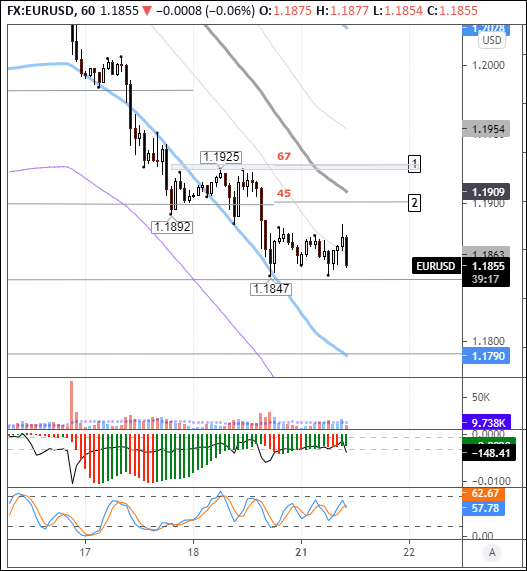