The EURUSD pair dropped 0.07% to 1.1730 on Thursday, August 12. Conversely, the DXY and 10-year Treasury yield moved higher after US macro data came out.

Initial jobless claims fell to 375,000, in line with expectations. The inflation readings came in higher than expected. The Producer Price Index (PPI) rose 1% in July compared to the median consensus of 0.6%. The PPI climbed 7.8% (vs. 7.3% expected) in the 12 months through July, a record high since the measure was introduced in November 2010.

During the North American trading session, the euro bears managed to push the pair down to 1.1724, where the 61.2% Fibonacci retracement from 1.1706 to 1.1754 was located. The 55-day SMA (mid-point balance line) also acted as support for the euro. The price bounced back from the support line, but buying activity remains low-key. 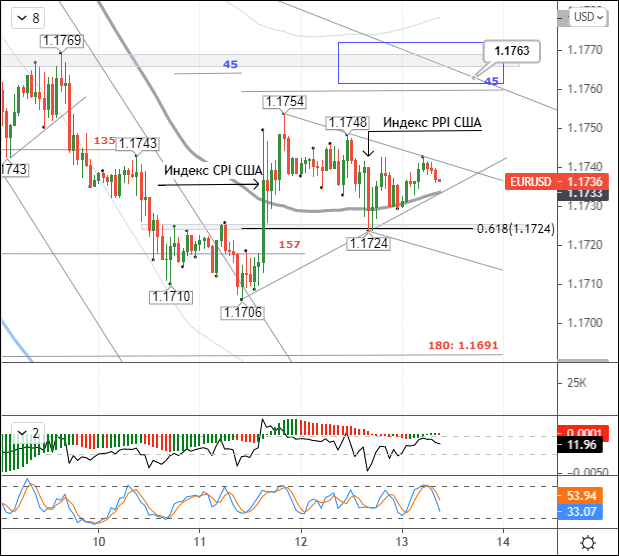 During Thursday’s North American session, the dollar lost impetus and reverted             to the downside. The dollar index (DXY) failed to gain a foothold above the 93.00 handle. By the time of writing (5:45 GMT), major currencies showed marginal fluctuations from yesterday's closing prices, with the euro changing hands at 1.1737.

US producer prices grew more than expected in July. The reading implies that consumer inflation will remain elevated over the coming months. And although this data point did not trigger any sharp fluctuations in the market, commodity currencies erased all the gains reached after the release of Wednesday’s CPI data.

EUR USD bounced off lows on the back of weakening dollar momentum, while the bulls remain vulnerable ahead of the weekend. The 1.1720 area has provided support. Below this level, a retracement to 1.1700 will likely be in the cards. A break below that mark would trigger heightened volatility and a leg down to 1.1680.

Conversely, if the euro continues to recover, the bulls will focus on the 1.1760-1.1770 resistance price zone.  If the euro take out that range, the bullish trend will pick up momentum. That said, the market outlook remains uncertain at this stage.