The EURUSD pair logged losses on Wednesday, August 18, down 0.34% to 1.1671. Dollar demand has been going strong ever since the start of the week. The key pair has slid 1.15% over the past three days, including APAC trading.

For most of the day, the price action hovered around 1.1718. After the FOMC minutes came out, the single currency rose to 1.1743, but the bulls eventually got blown away and selling resumed with renewed impetus. Asian FX participants activated protective stops below 1.17 today.

The reaction of market participants to the minutes of the July FOMC meeting was rather ambivalent. Initially, the dollar came under pressure, but then pared all losses. The minutes highlighted a discrepancy in politicians' comments in favor of a monetary policy adjustment. FOMC members voiced dissatisfaction with the recovery in employment. Also, some are afraid of inflation, while others are more concerned about the labor market. There is no common understanding about when to start cutting QE or by how much. One thing is clear though – bond purchases will be scaled back before long. Many pundits expect the Fed to announce the reduction at its monetary policy meeting scheduled for September 21-22. 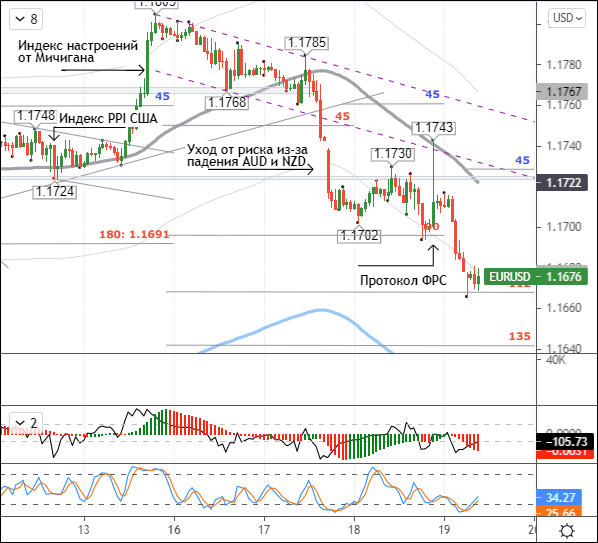 During Asian trading, the DXY breached the 93.20 resistance level. For dollar index futures, the target is around 93.92. The only wildcard now is whether or not profit taking on long positions will break out at the current level, given that 93.47 is the index’s March 31 peak.

By the time of writing, major currencies were all trading in the red, with the single currency trading at 1.1675. As for crosses, the euro is firming against sterling, the loonie, the kiwi and the aussie, while the yen and the franc are losing ground. S&P 500 index futures are down 0.41% as risk aversion is firmly entrenched across all markets.

From the top of 1.1805, the euro fell by 112 degrees to 1.1668. Given the support for crosses, a minor correction to 1.1700 could be in the cards. For a deep correction in the euro, all major pairs would have to be in retreat. There are no buy signals at the moment, but they could arise within the next four hours. The euro remains under pressure but is propped up by crosses.

The decline in the Australian dollar could not even be halted by upbeat data on the country’s labor market. The RBNZ governor said that the central bank will continue to tighten monetary policy at a later time. On Wednesday, the regulator decided to hold rates steady at 0.25% due to snap lockdowns across the country.

At 12:30 GMT the ECB will release its monetary policy report. If the euro recoups losses, the euro bulls will not be afraid of what’s in the report.

After the FOMC minutes, the focus of attention of traders and investors now shifts to the annual Jackson Hole Symposium, which will be held next week, and perhaps at that event Fed Chair Powell will weigh in on the next steps to be taken by the central bank.