Trading in the euro ended with gains on Friday, August 20, up 0.22% to 1.1701. The bears came within 2 pips of retracing to the August 19 low of 1.1666 and opted for profit taking ahead of the weekend. The trigger for closing short positions was comments from Dallas Fed President Robert Kaplan. In an interview with Fox Business, Kaplan stated that he has softened his stimulus tapering position due to the Delta strain. Previously, he wanted the Fed to start easing back on bond purchases in October. Now his opinion has changed. He pledged to closely monitor the development of the epidemiological situation. If the delta strain has a stronger than expected negative impact on GDP growth, he will favor a later reduction in QE. In the upshot, the euro recovered to 1.1705. 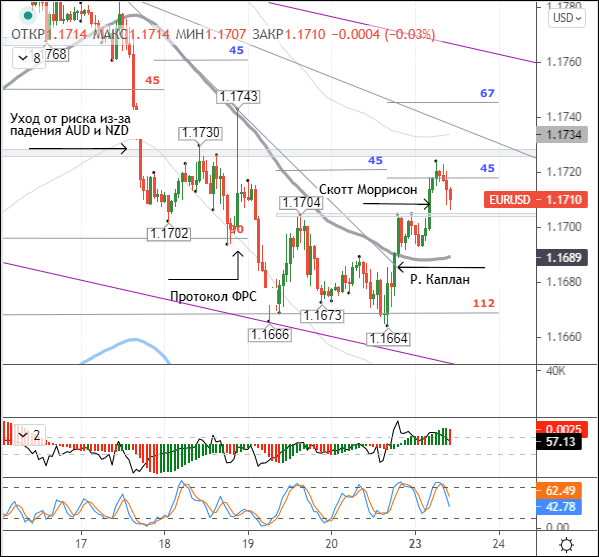 By the time of writing, the single currency was trading at 1.1708. Heightened demand for risk assets has been seen on the market since early Monday morning. Australian PM Scott Morrison has sparked optimism. He urged state leaders to stick to the nationwide plan that calls for reopening the country in spite of Covid case growth.

This week’s highlight will be Fed Chairman Jerome Powell’s speech at the Jackson Hole symposium, during which Powell could shed some light on the future prospects of the Fed's monetary policy. The event will be held online. The keynote speech, which will be delivered by Fed Chair Powell, is scheduled for 14:00 GMT on August 27.