Euro fends off macro and Fedspeak

The EURUSD pair fell 0.17% to 1.1752 on Thursday, August 26. Price action dropped from 1.1779 during the North American trading session after US 2Q GDP came out, alongside statements by two FOMC members, James Bullard and Esther George.

St. Louis Fed President James Bullard (not a voting member) told CNBC in an interview that the central bank should have its tapering process finished by the end of March 2022.

He was joined by Kansas Fed President Esther George, who claimed that the US economic recovery has made substantial further progress towards scaling back its $120 bln per month bond purchases.

Ahead of Powell's speech today, these statements may be regarded as verbal interventions in favor of the dollar. Market participants have already been in a tense situation for several weeks, and FOMC representatives are adding fuel to the fire, trying to drum up demand for the dollar. This is clearly a matter of personal opinion, so what is the point in repeating it 10 times? Dallas Fed President Robert Kaplan also spoke in favor of trimming stimulus measures.

The EURUSD pair retreated to 1.1746, with the price action easing as the bulls drew support from euro crosses.

Major currencies showed mixed dynamics in Asian trading. By the time of writing, the euro was trading at 1.1762. Price action recovered from 1.1742. Losses in key currencies likely followed remarks by Dallas Fed President Robert Kaplan, who told CNBC that he still believes stimulus reduction will be announced at the September monetary policy meeting, with tapering to start in October or shortly thereafter.

Two key data points are in the spotlight today: July Personal Consumption Spending Index and the Reuters/Michigan Consumer Sentiment Index. The former will be released at 15:30 (GMT 3), and the latter at 17:00 (GMT 3), at which time Fed Chair Powell commences his speech. We are certain that Powell already knows about these readings, so his speech will no doubt keep this data in mind.

Representatives of the Federal Reserve are preparing the markets for QE to be wound down, but the question remains: what will Jerome Powell say today? He has already made it abundantly clear that the end of QE has nothing to do with interest rates, and that the surge in inflation is transitory.

EURUSD pair is trading near the balance line (55-day SMA). Leaving aside Powell’s upcoming speech, sentiment broadly points to a rise in the single currency to 1.1800. The Stochastic Oscillator is on top, and the CCI is near 100. If Europe opens higher, we can assume that the bulls will position themselves in the vicinity of 1.1770. That said, we are more inclined to see the key pair flatlining until 15:30 (GMT 3), since many FX players have cashed out so as not to expose their positions to risk.

Bottom line: The euro closed slightly to the downside on Thursday due to strengthening of the dollar and remarks from two Fed representatives, who urged the central bank to start winding down QE. The euro slipped but then recovered to 1.1763. Overall, sentiment in the EURUSD pair still points to continued growth to 1.1800. FX players will be focused today on US macro releases and Powell’s speech. Heightened volatility can be expected from 15:30 (GMT 3) to 19:00 (GMT 3). 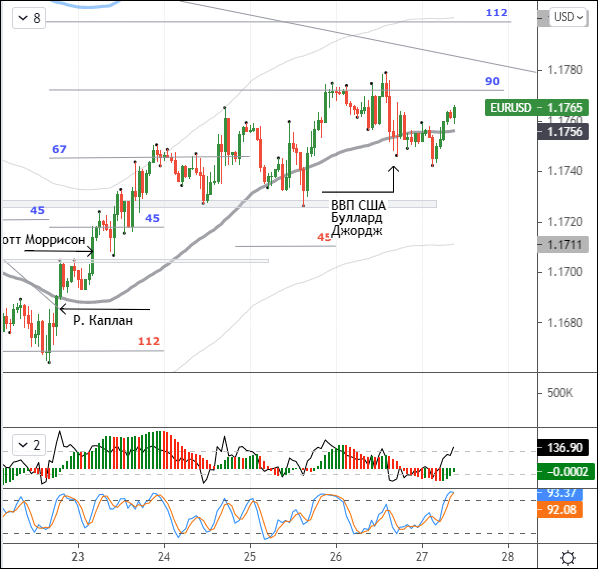