The single currency surged 0.37%, to 1.1796 on Friday, August 27. Ahead of Fed Chair Powell’s speech, EURUSD slipped to 1.1735. A pullback followed the release of US macro data, but it was mainly triggered by remarks from Cleveland Fed President Loretta Mester, who said she sees the likelihood that monthly bond purchases could start to be tapered as early as next month.

The dollar started to weaken across the board during Powell’s speech. Market participants pegged Powell’s narrative as dovish even though he stated that QE could be reduced by year-end. He also cautioned that the Fed’s tapering of its bond purchases does not signal that it plans soon to start raising interest rates.

Major currencies saw patchy performance in Asian trading. Trading opened with the dollar moving higher, but the bulls seized the initiative for a while. The aussie and the kiwi are currently trading in the red on the back of Covid-related negativity.

Overall, sentiment points to further weakening of the dollar, so after a brief correction, we can expect to see renewed upside momentum in the EURUSD pair.

The balance line (55-day SMA) crosses through the 1.1773 level. In six days, the euro has climbed 150 pips (1.28%). Therefore, a downward correction looks likely on Monday. To continue the upward movement, the bulls will need to hold the 1.1782 level, otherwise, pressure on the euro will increase through profit-taking on long positions.

Bottom line: the euro surged on Friday after Powell's speech. The dollar index breached key levels, so its decline may continue as part of the correction, which would exert a positive impact on the single currency. 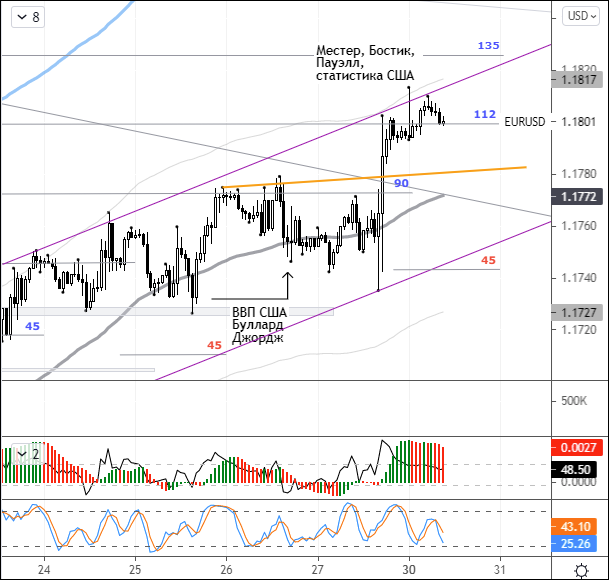