The EURUSD pair advanced 0.10% to 1.1809 on Tuesday, August 31. At the outset of the European session, buyers retraced to the APAC high of 1.1845, where profit-taking set in. The DXY index fell to 92.39. Apparently, after parsing Fed Chair Powell’s speech, investors concluded that the central bank is in no hurry to start tapering. Furthermore, incoming the US macro releases turned out to be lackluster.

It was quite surprising to see the dollar rising amid weak macro data. The Conference Board’s Consumer Confidence Index slid from 125.1 in the previous month to a six-month low of 113.8 in August compared to the 124.0 median consensus.

The consumer confidence index in the US in August fell to 113.8 from 125.1 in July (revised from 129.1) against 124 expected. The dollar drew support from rising 10-year US Treasury yields.

Major currencies showed mixed performance in APAC trading. Today’s leaderboard is topped by the Australian and New Zealand dollars. On the other side of the FX spectrum, the franc and the yen have seen the steepest losses. The euro is also trading in the red due to a decline in the EURGBP cross.

The aussie is underpinned by strong Q2 GDP, but it started to strengthen later. Overall, the market is experiencing an upturn in risk appetite. That said, hopefully, buyers will not opt for profit-taking on long positions after retracing to highs, as was the case on Tuesday.

A raft of European macro releases is due out today. This evening, the ISM manufacturing index will be published. Major currencies could strengthen ahead of the North American trading session, then investors will recalibrate their portfolios based on the incoming data. This week’s highlight will be the August NFP report, which is one of the Fed’s preferred indicators.

Given that sellers have retraced to lows and the decline from 1.1845 has a three-wave structure, we expect EURUSD to resume its ascent (the Stochastic Oscillator looks buy-friendly, and the AO shows signs of a reversal).

On a more negative note, we can see that pinbars have formed on the daily TF of the dollar and euro index. They indicate a possible upward reversal of the DXY and continuation of the downward correction for the euro.

Given that the pound, the aussie and the kiwi are gaining strength, bulls have a chance to push up the price up to 1.1825. US macro data could offer this opportunity.

Bottom line: the euro closed slightly higher on Monday. During the North American session, buyers saw all gains from the Asian session erased. When faced with the trendline, they began to take profit on long positions. Today, market participants will be focused on EU and US PMI prints. Heightened risk appetite has been seen this morning. The euro is holding back upside in the EURGBP cross. A moderate rise to 1.1825 is expected ahead of the North American session. 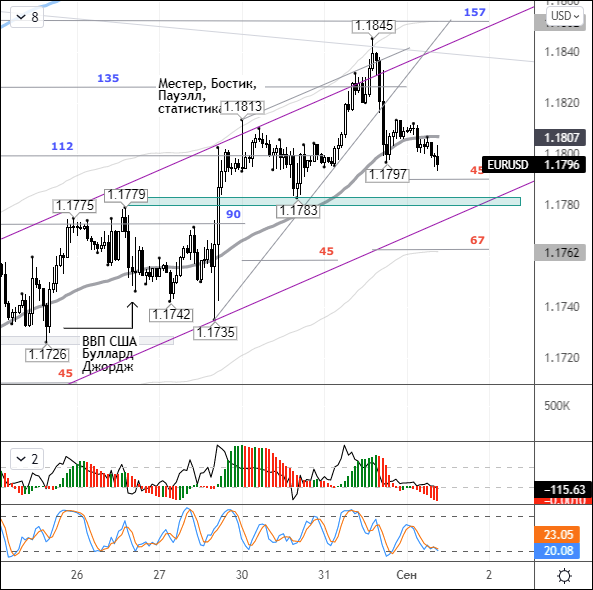