The ECB said it would slightly reduce the pace of bond buying under its emergency scheme in the next quarter. The regulator has not signaled its next policy move, including how it could wind down the €1.85 trln Pandemic Emergency Purchase Programme (PEPP). The Governing Council will also continue to conduct net asset purchases under the PEPP until at least the end of March 2022 and, in any case, until it judges that the coronavirus crisis phase is over.

Major currencies are trading in positive territory, except for the franc and the yen. The leaderboard in terms of profitability is topped by the kiwi ( 0.26%) and the aussie ( 0.17%). By the time of this writing, the euro was trading at 1.1838. The euro is trading slightly higher as gains are capped by a decline in the EURGBP cross.

Price action retreated to 1.1805 after Christine Lagarde's speech, but rebounded later. The demand for risk assets shows a buy-side bias today, so on Friday buyers have a good chance to head north, up to 1.1875.

Atlanta Fed President Rafael Bostic, who is currently a voting member on the FOMC, believes the Fed will pull back on its asset-buying campaign this year though he does not expect a decision at the September 21-22 FOMC meeting.

During APAC trading, the euro fell to 1.1819, from which buying resumed. Meanwhile, the dollar started to sell off across the board. Buyers consolidated above the balance line on the first wave of buying, and they approached the trendline from the 1.1909 top on the second wave.

The recovery from the September 8 low 1.1802 is a corrective move. Given that during yesterday's fall, price action stopped above 1.1802, today buyers have the chance to reach 1.1875. This would require a resolute breach of the 1.1845 level and support from the cross.

Bottom line: The euro posted mild gains on Thursday. Buyers apparently lost their glasses during Christine’s Lagarde. They defended the 1.18 level and today are attempting to break out of the trendline from the 1.1909 top. Heightened demand for risk assets was seen on Friday morning. Technically, all conditions are in play for an upward move to 1.1875. Interim resistance is pegged at 1.1855. 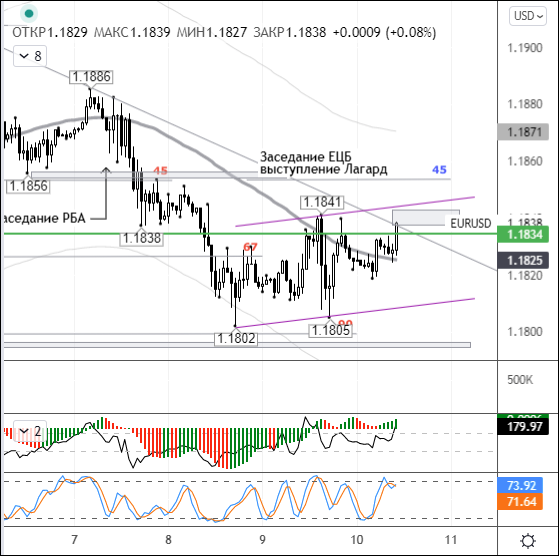