Risk assets fell on Tuesday as worries of higher inflation increasing stagflation risks seeped back into markets. This saw the broad dollar index, DXY, close marginally in the green.

The latest eurozone inflation data proved highly uncomfortable for the ECB with the flash estimate surprising on the upside on the both the headline and core prints. We get the Bank of Canada meeting later today with a 50bp rate hike fully priced in.

Treasury yields, that is interest rates on US Government bonds, jumped sharply higher after the Fed Governor Waller said he wanted to go down the route of several 50bp rate hikes in order to be certain that inflation is brought under control. It seems there is a split developing on the Fed with the likes of Atlanta Fed President Bostic more open to a possible pause in September.

DXY stabilises ahead of jobs data

The dollar index fell 1.2% in May giving back some of its hefty gains on the year. We get two job reports today which act as the forerunners to the monthly non-farm payrolls numbers released on Friday. US ADP private sector employment for May and the US JOLTS data for April are expected to highlight how tight the US labour market still is. The latter is forecast to show that job vacancies fell to 11.3mn in April, down slightly form March’s 11.5mn.

After making 20-year highs in mid-May just above 105, the greenback has pulled back below resistance at the January 2017 high at 103.82 and the pandemic 2020 top at 102.99. This should now act as a very strong resistance zone to more upside. Prices are currently trading just above the 50-day simple moving average which is acting as decent support at 101.49. 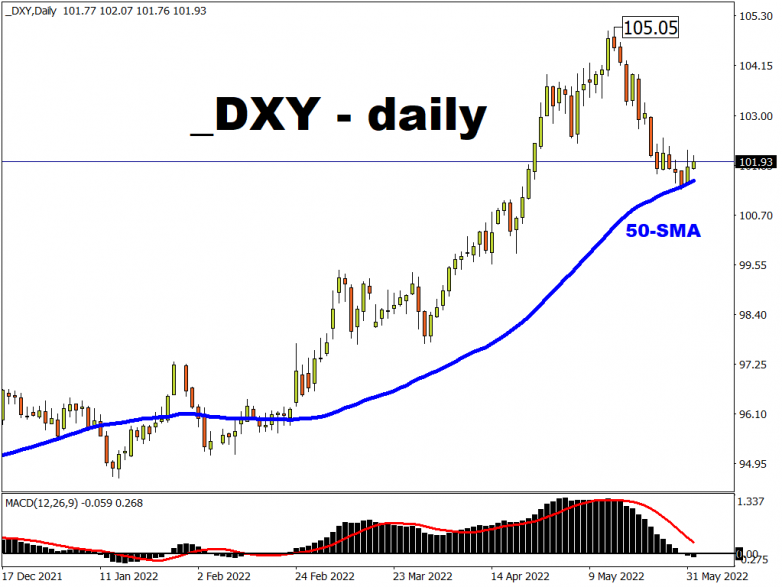 The BoC is fully expected to raise rates by 50bps at its meeting later today. A relatively hawkish statement is also likely considering that both growth and inflation are running well ahead of what the bank forecast in its previous monetary policy report. Inflation is at multi-decade highs while the jobs market has fully recovered all its pandemic jobs losses.

Hawkish chatter from policymakers has been in abundance recently. Various officials have been on the wires stating among other comments that “current policy is too stimulative” and the bank needs to get rates higher “quickly”.

Could officials surprise with an even bigger 75bp hike?

The bank’s guidance will be important with a “hawkish hike” very much the minimum expected by markets.

The loonie has been benefitting from several tailwinds recently. The bullish commodity move has helped while a hawkish central bank with around 170bp of tightening priced in by money markets for this year, and which could be extended, is another crux of support. The BoC may actually out-hike the Fed in the number of 50bps rate rises in the next few months. 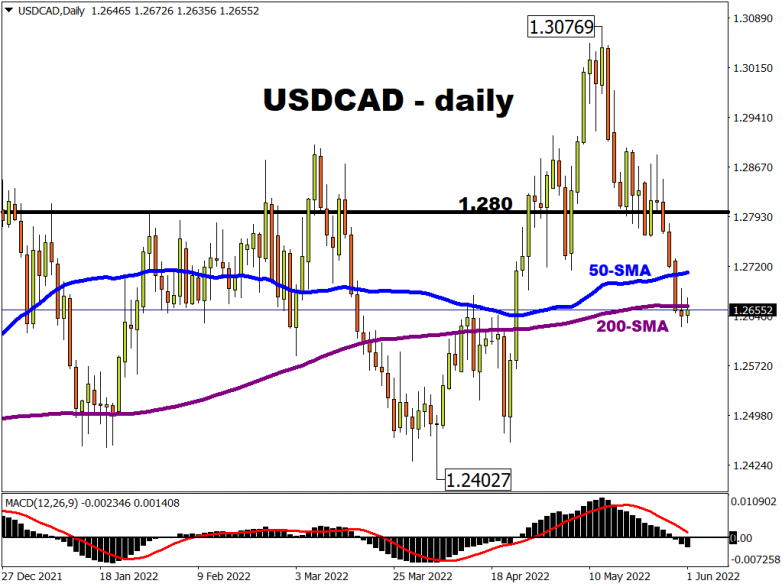