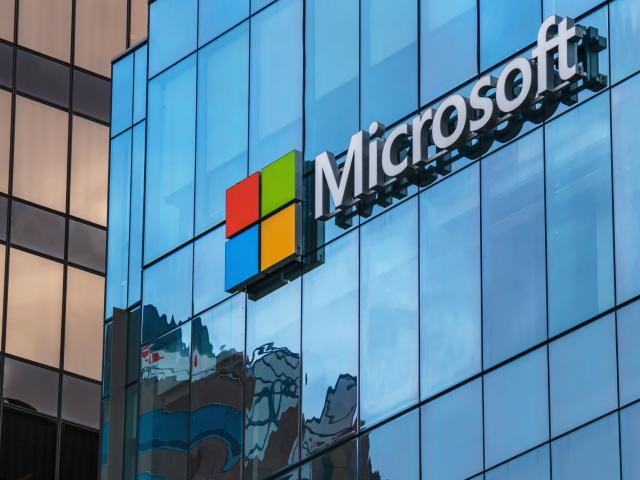 Microsoft is due to announce its earnings from the past three months after US markets close today (Tuesday, 26 January).

A positive surprise in its earnings, or a bullish outlook from the company, could well propel the tech giant to a new record high.

Such a feat is certainly within reach, considering that its shares are now just 0.92% away from its highest ever closing price, which was registered back on 2nd September.

Markets are currently pricing in a single-day, absolute move of 3.68 percent following its imminent earnings announcement. While prices could go either way, a move of that magnitude to the upside would set a new record high for Microsoft stocks. 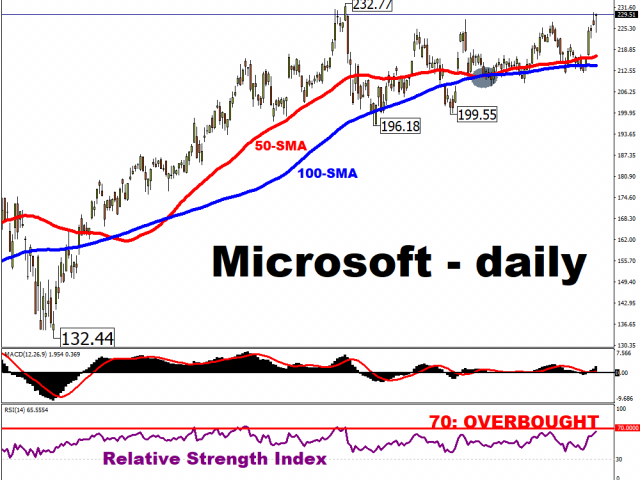 Such an event would signal a turning of the tide for Microsoft stocks, which had flirted with a death cross before its 50-day simple moving average (SMA) bounced off its 100-day counterpart.

And with momentum now clearly turning bullish, while its 14-day relative strength index has yet to officially hit the 70 mark which denotes ‘overbought’ conditions, it appears that the stock has more headroom for gains.

How have Microsoft's stocks performed so far in 2021?

Microsoft has climbed almost 8 percent since 15 January as markets front-loaded on the stock ahead of an expected positive read on its Q4 results.

Having posted 5 consecutive days of gains, its year-to-date advance now stands at 3.2%.

What are the forecasts for Microsoft’s Q4 earnings?

It’s not just the share prices that are eyeing record highs.

Microsoft’s quarterly revenue is expected to breach the psychologically-important $40 billion mark for the first time in its history.

Such figures, if confirmed, would mark a gain of about 9% compared to the same period in 2019.

This was likely driven by rising revenues from its consumer PC segment, given the greater demand for more computer software and hardware needed to work from home amidst extended lockdowns around the world. Although still-empty offices in major cities meant suppressed sales of work PCs and software upgrades, yet the ongoing transition to cloud computing is expected to offer another boost to the company’s top line.

And of course, with few public entertainment choices allowed due to the virus-curbing measures, all that time spent at home also meant more gaming time. That is likely to translate into robust demand for Microsoft’s gaming products, highlighted by the Xbox launch during the quarter.

Other key Q4 figures to look out for:

And its cash pile is also set to hit a new record high.

Microsoft sat on a cash hoard of $138 billion as at the end of September 2020. That chunk of change likely grew over the past three months, driven not just by the higher revenues, but also because of the lack of mergers and acquisitions targets (recall last year’s failed attempt to purchase TikTok).

What does this huge cash pile mean for shareholders?

A record high cash pile indicates that Microsoft is in a good position to juice up shareholders returns, either by way of acquisitions or by paying out dividends and engaging in share buybacks.

It recently led an investment round in Cruise, with hopes that the self-driving car startup can boost demand for Microsoft's cloud-computing services. The software giant is also expected to announce a 10% higher dividend to 56 cents per share in March.

Such a solid balance sheet promises stability to investors amid the bouts of market turbulence, even though the allure of Big Tech is expected to wane as the world continues on its journey into the post-pandemic era.