BTC’s correction does not yet appear to be trend reversal

The holiday rally brought Bitcoin to new all-time highs. Although the bears stepped up after reaching $34K, their strength was clearly not enough to initiate a broad correction and the drop below $28k was very short-lived. During the last 24 hours, BTC has been losing about 3% and traded above $31.3K. It’s hard to call such dynamics a “trend reversal”, rather we are facing a brief correction within the consolidation after impressive growth. 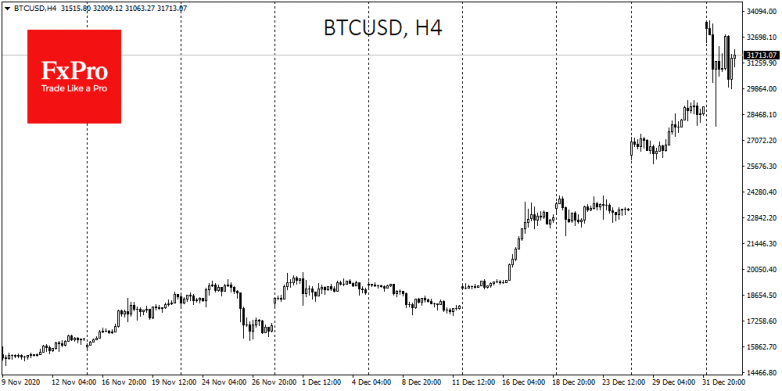 It’s been less than a month since Bitcoin confidently broke through $20K, and since then we’ve seen institutional investors continue their buying spree. Retail investors are indeed taking profits, especially those who have been waiting for this moment for the last 3 years, but the big investors are here to see new all-time highs.

The Bitcoin dominance index was around 73% when the coin hit an all-time high, but began to decline afterwards along with the price, amid rising demand for altcoins. The Crypto Fear & Greed Index has been in “extreme greed” mode over the past month but technical indicators now have significantly less influence on the crypto market, being in the shadow of demand from large capital and retail FOMO.

As always, after another spike in demand for Bitcoin, attention turns to altcoins. Of course, Ethereum (ETH) remains the protagonist of alternative cryptocurrencies and was the first to approach the historical maximum. Nevertheless, at this stage, the coin failed to take the level of around $1,400. However, the good news is that the correction failed to push ETH below $1K. 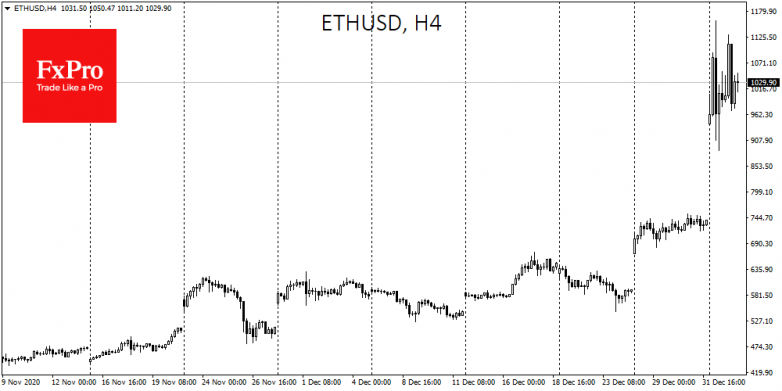 Other altcoins were also able to show impressive growth, albeit losing slightly as part of the correction. So far, digital currencies as a whole are showing that the rally’s potential may not yet be exhausted. Now the market is shedding the least optimistic investors and may consolidate for a while, before turning to a new growth phase. Should such a scenario materialise, it could activate the most active phase of the FOMO, which would include not only retail investors but also the most conservative-minded large capital.

2020 is over, but no one on the planet is particularly excited about the new 2021 year. There are several reasons for this, including economic, epidemiological, geopolitical, and natural factors. It is clear that even if the spread of the epidemic can be controlled, the economic consequences of the last year will be felt for many to come.