A painful crypto correction or the end of the rally?

The crypto market has turned red. On the second day of the week, digital currencies moved into a massive correction. Hardly anyone was surprised by the sell-off after such impressive growth; nevertheless, it is always much harder to accept the decrease than to enjoy the growth and predict new highs. As Bitcoin approached $60K, it was expected to decline. Technical indicators, over-the-top hype, and speculations were clearly pointing to an impending drop. 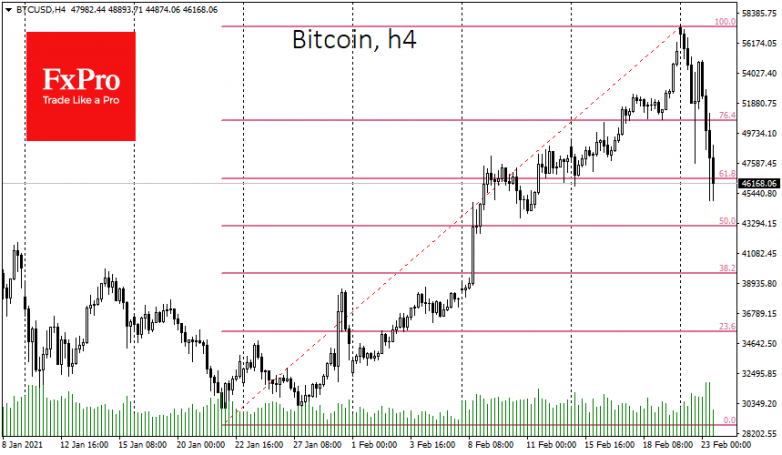 The benchmark cryptocurrency has lost 11% in 24 hours and is trading around $49K, having recovered slightly from its plunge to $45K. However, there is a high probability that there may be a lot fewer market participants willing to buy the asset at current levels than sellers who are taking profits. It is worth noting that in some cases, we may see profit-taking after purchasing the asset on the plunge to a low around $5K in March 2020.

According to analyst firm Bybt, $750 million worth of Bitcoin positions were liquidated in one day. In just one hour on February 22nd, $400 million worth of long positions in Bitcoin futures were liquidated. It is also very likely that investors entered the market and started playing against the crowd, as they did in late 2017. The current situation is thought to be a “healing reset” for the market. Whether this is true will become apparent within a week.

Ethereum (ETH), the leading altcoin, showed an even larger decline, falling 18% overnight and trading near $1500. The drop comes along with the entire market, but in Ethereum, it may be even more significant, as the coin has shown more rapid growth since the beginning of the year ( 167%) compared to Bitcoin ( 93%). Ethereum again became the leading coin for miners, and commissions jumped to inadequate levels, which refers us to the situation in 2017.  ETH confidently overcame its historical maximum, unlike most altcoins, but very quickly returned to it. 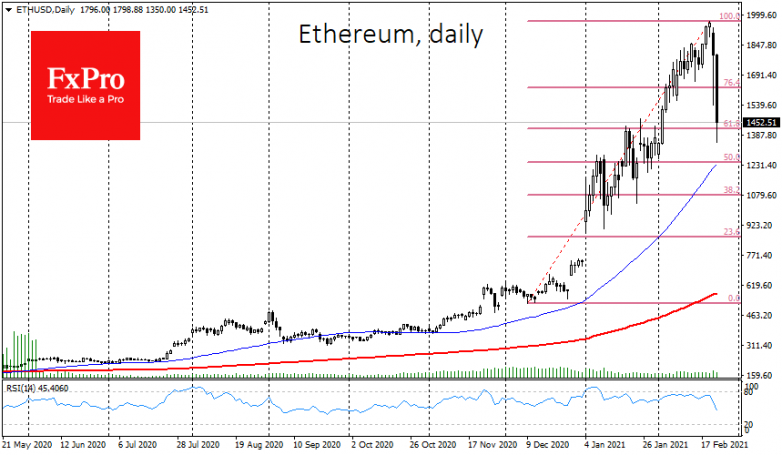 In the near future, the prospects of the crypto market will be seriously influenced by the comments of U.S. monetary authorities. If the economy continues to receive stimulus not only in words, the situation with high-risk assets may stabilise for a while.

The confrontation between the SEC and XRP will be another important precedent for the market. We can already see that even without a final decision, Ripple is taking a severe reputational hit. MoneyGram, which has long been considered one of Ripple’s main trump cards, has refused to use XRP. Moreover, U.S. financial authorities may similarly deal with other projects that, for whatever reason, will be perceived as systemic risks to the economy.