On the last day of March, Bitcoin approached the $60K threshold again, but a wave of sales almost immediately pushed the benchmark cryptocurrency to $57K. For the third consecutive day, BTCUSD seems to be hitting an invisible ceiling on the approach to $60K. Simultaneously, relatively small pullbacks allow us to talk about the consolidation of buying forces before a further round of growth, rather than about any fundamental difficulties with the rally.

Guided by Fibonacci levels, the next main ones for Bitcoin may be the $73,000 and $92,000 price levels. However, they will only be possible if resistance at $61K is confidently overcome. 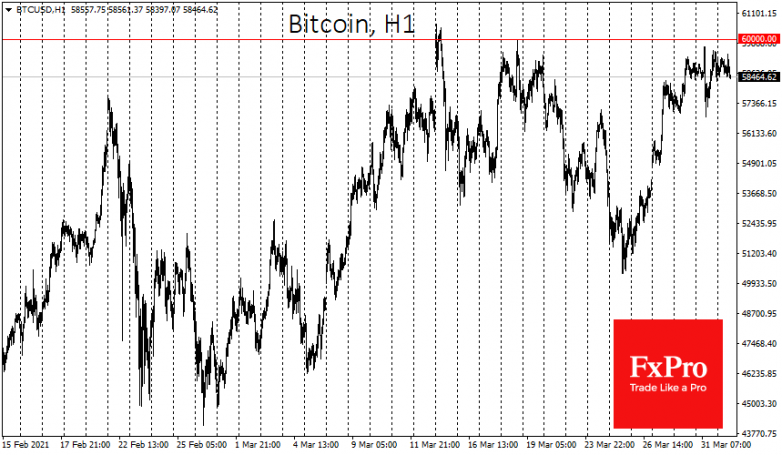 Glassnode analysts found that about three-quarters of bitcoins in circulation last moved after reaching a price of about $11K. This isn’t the first study proving that investors are prone to long-term strategies for Bitcoin, suggesting that we may indeed see historical highs in the future, which at this stage may seem like unrealistic targets. The company has also found that bitcoins are not only being put off for the long term, but the number of proponents of this approach is generally growing.

It is likely that a combination of the propensity for long-term investments, active accumulation of coins, clear interest from institutional investors, and a wide range of news about Bitcoin’s acceptance into the traditional settlement system made it possible to maintain the current price levels. At this stage, correction is a great opportunity to buy the asset on a pullback.

First, Tesla launched the ability to buy cars with bitcoins, promising not to convert them into fiat. Then the processing giant Visa came on the scene, announcing the integration of USDC stablecoin into payments. While this news has no direct impact on Bitcoin, such decisions improve the reputation of cryptocurrencies in general. Visa’s announcement was followed by news from PayPal, which allows its U.S. users to pay with leading cryptocurrencies. It then became known that the investment bank Goldman Sachs in the second quarter of 2021 will add investment instruments based on the benchmark cryptocurrency, including instruments with physical delivery.

Building the infrastructure for investing in Bitcoin during the crypto winter was the right direction. At this point, we are witnessing the major players in the traditional market having a warmer attitude towards the major cryptocurrencies. The result will be more and more integration of the asset into the traditional market, but there is still a very troubling question about the attitude of the U.S. regulator about what is happening.

Apparently, Bitcoin’s increasing dependence on institutional money suits American authorities and, in a sense, calms them down. In addition, as long as bitcoin and its leading alternatives act as assets rather than a means of payment in the crypto market, the regulator’s attitude remains neutral. Facebook’s Libra was supposed to be an international means of payment but was quickly brought to a standstill.