The stock market seems overheated. Sell in May?

The US S&P500 closed Monday at historic highs. Its futures also remain near record highs, while Asia-Pacific indices are losing 0.15%, unable to support America’s positive sentiment. 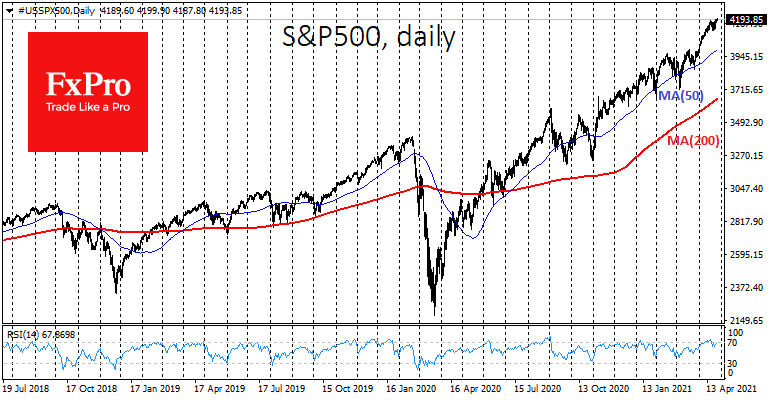 From the market cycle perspective, the bull market is relatively young after a “reset” just over a year ago. So it is not a good time to be extremely bearish. But the S&P500 has rallied 9% in the last five weeks, the average annual rate of growth in stocks in 10x less time.

This kind of “bubbling” of stock indices at the top could prove to be very dangerous for new short-term buyers. Simply put, the markets need a correction that can clear the way for further gains.

On the daily charts of the S&P500, the RSI remains near the overbought level close to 70. Traders indeed notice that higher highs of the S&P500 are not supported by higher highs in the Relative Strength Index. This situation is often a precursor to a correction, indicating the exhaustion of bulls power. 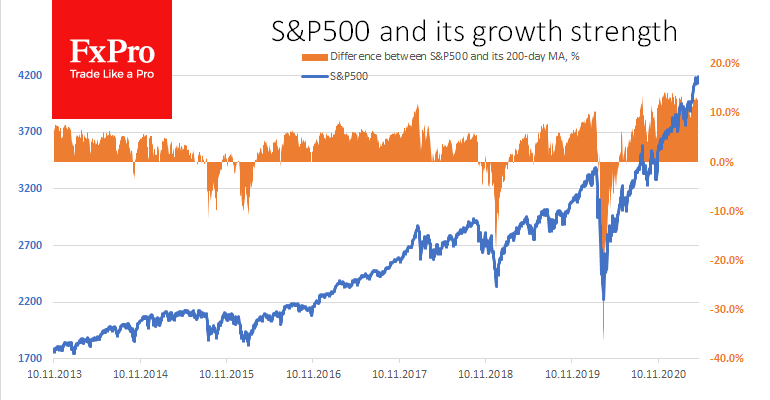 Separately, the S&P500 is above its 50-day average by more than 5.5%, the largest gap since August, which was followed by a one-month correction.

S&P500 is more than 13% above its 200-day moving average. At its peak in January, this divergence reached 14.3%, after which the index reversed to a decline. Afterwards, we also witnessed an increased correctional sentiment when the gap between the index and the 200-day average reached 13%.

Thus, the saying “sell in May and go away” could serve as a warning this year before a market correction after a strong bullish rally. This motto, however, usually refers to nothing more than a period of reduced market volatility from May to September.