China and European central banks have cheered up the markets

Last week was quite unsettling for financial markets, but investor optimism is high at the beginning of the new week. US stocks closed mostly higher last Friday, and Asian indices rallied for relief in Monday’s session.

The reasons for investor optimism are real: Major global central banks still maintain a soft stance and are prepared to step up support if the upside momentum wears off. For instance, last week, the Chinese central bank lowered its reserve requirement rate, a policy easing to support an economy that has started to show signs of slowing growth.

ECB President Christine Lagarde said that she would announce new monetary stimulus rules in the next 10 days after winding down the existing emergency measures on Monday morning. She also said that the ECB would follow a renewed monetary policy strategy at its next meeting, which envisages a temporary inflation tolerance above 2%. Potentially, the PBC and ECB moves show that central banks stick to easy policy, which has brought back demand for risky assets.

In contrast to last week’s dynamics, we see both strengthening in equities and commodities and weakening in the dollar and other defensive currencies. The VIX fear index is back to 16 after jumping from 15 to 22 late last week. All this confirms the bullish sentiment of the markets.

Among individual tickers worth mentioning is Richard Branson’s successful flight on Virgin Galactic. In the run-up to the flight, which took place on Sunday, there was a strong rally in SPCE, but prices stepped down from the highs on Thursday and Friday. 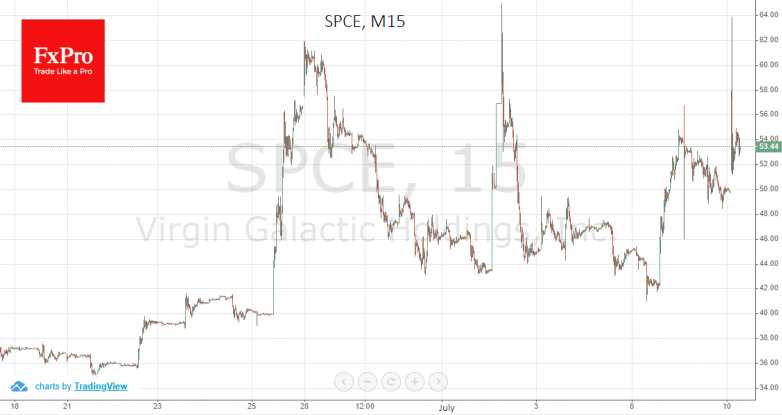 The lack of a rally in SPCE shares would be a worrying signal that investors have become saturated with the stock. The same could be valid for the whole market, which has put very optimistic expectations in the quotes, which will not be easy to confirm. It would be ironic if the markets were to enter broad-based profit-taking this week on the back of the highly optimistic expectations. However, central banks have coped very well with their role as the last line of support for the economy.