Investors were actively purchasing the greenback last week, meanwhile, Powell didn’t succeed to reverse the trend on Wednesday. More than that, he added in its statement that the central bank noted significant risks on the part of pandemic and its willingness to use all of its options to buoy the economy.

In reaction to that, investors pushed the U.S. currency to new lows against all main rivals. The single currency continues to benefit from the weak greenback, while the UK’s pound, Swiss franc and Aussie are still in high demand. Despite the fact that the dollar was able to bounce off the daily lows by the end of the session, but one clearly sees that buyers are lacking. This can be related partially to a Jerome Powell’s statement that household spending had rebounded by about 50 percent, but manufacturing capital investment did not show a similar trend.

One should remind that the pandemic has left a devastating mark on inflation; the increased food prices worsen the picture, whereas the aggravating epidemiological situation in the country will put further pressure on the economy. So, taking into consideration the rise in coronavirus infections and death toll as well as the expiration of the unemployment benefit supplement program, the Powell’s  discouraging statement was not a surprise at all. That’s why the market reaction was a sluggish one. The stock market was able to keep profit, and the yield on government bonds finished the day with a decline.

Most likely, the forthcoming report on the dynamics of Q2 U.S. GDP will increase the regulator’s worries regarding the country's economy. Powell considers it will be the least data ever. The fresh dollar sell-off suggests that market participants have already taken it into consideration such an outcome in their quotes, but it is worth mentioning that in the coming months, the economic recovery may go wrong. Strong fiscal incentives or vaccine development could solve this problem, but the likelihood of these events in the short term is low enough. Investors are in anxiety regarding GDP dynamics, but the main headache is what happens when the benefit surcharge is being replaced by another program that does not meet the needs of most U.S. citizens.

The strong euro, on the other hand, reflects market participants' faith in a better tomorrow for the eurozone. Macro data for the region continues to improve, and at the moment the forecast for GDP for the Q3 suggests an increase in the numbers. Thus, while the growth of the German economy is likely to continue to decline in Q2, the recession will be technical.

The economic restart led to an increase in consumer spending and this primarily affected France and Germany, where consumption has almost returned to pre-crisis levels according to the most recent reports.

So, investors are closely monitoring the impact of the recent coronavirus outbreak in Europe, but the pace of local economic recovery is in progress as the fight with COVID-19 and the overall outlook for the eurozone are now much better than the situation in the U.S., which explains the strong gain in the single currency against the dollar. To recall, the EUR / USD pair ended trading in the red zone only five times in July. The euro slipped against the greenback by 0.34 percent on Thursday, to reach 1.1751 at 0943 GMT. 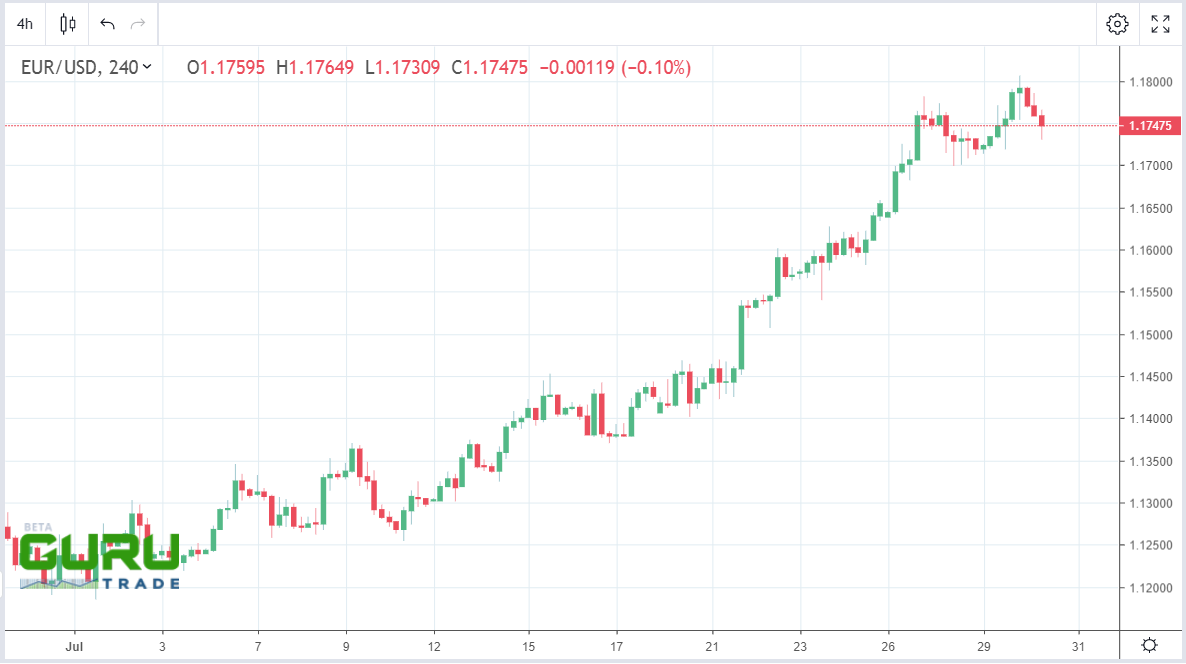 All three commodity currencies strengthened the day before and the Aussie topped them. Inflation in Australia exceeded expectations as prices did not fall as much in Q2 as experts estimated. The pound also strengthened due to a rise in the number of approved mortgages and a not so strong decrease in retail prices as initially expected.