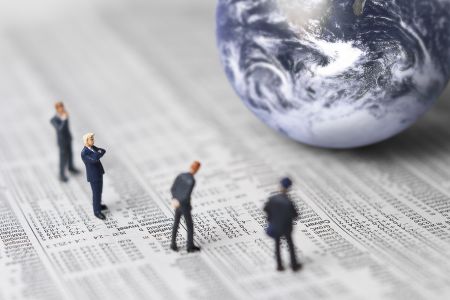 Why politics affects currency on Forex?

In the classical comprehension of this term, a political risk for any businessman – is a threat of profit reduction or an emergence of losses which is a consequence of state policy. First of all it is connected with possible changes in its vector or in the structure of the government itself. However, for traders and investors, political changes represent not only danger, but also a new trading opportunities. We can get profit, both from currency growth and fall, the main thing is to catch the correct wave!

Why politics influences the currency rate?

Investors in our global world want to invest money in the stable states with the strong economy and steady political system. Political instability provokes loss of trust of currency and capital flow in currencies of more reliable countries. The policy risk is a component of country risk, i.e. the risk of change of the current or future political or economic conditions in the country in that degree in which they can affect a capability of the country, companies, and other borrowers to answer for obligations of external debt.

The high political risk is, as a rule, a characteristic of the countries with an undeveloped economy and not settled legislative system, or for the countries with open foreign policy conflicts. This type of risk changes in time: for example, since 2013 the level of policy risk in Ukraine considerably increased through several years ago the country was rather stable in the political aspect. The countries with the smallest level of such risk are Luxembourg, Norway, Switzerland, and Denmark. These are countries with high level of economic development, transparent electoral system, and extremely neutral foreign policy.

Politics and Forex in contemporary examples

Let's explore several types of the political events affecting market on real modern examples so that you understand how they actually affect the Forex market:

Parliamentary elections in Great Britain are a striking example. The pronounced leader in this race isn't present, and forming of the coalition can stretch in time and create so-called "hanged government". This factor is a medium-term negative forecast for the British currency.

Appointments and resignations of government agents.

The saying "a new broom sweeps clean" means that when new policy maker comes to power the uncertainty grows and influence economics.

Social instability – meetings, marches, strikes – potentially can lead to power collisions and this is the most frightening thing for the capital.

The growth of foreign policy intensity between the countries.

Also the geopolitical conflict between Russia and Ukraine, which in 2014 led to the large-scale capital outflow from both countries ($150 billion from Russia and from Ukraine) and to the dramatic fall of both currencies is worth to mention.

A referendum on the independence of separate parts of the existing states.

As a good example the referendum on Scotland independence, which took place in September, 2014 can serve. For several months, news about the results of the last polls didn't descend from headings of tabloids, and the British currency remained under pressure. The next day after vote completion the factor came to naught – Scotland preferred to remain the part of the United Kingdom.

Everything is simple: presidential speeches have always influenced the currency and economic life in general.

In 2015, the question of Greek insolvency moved again to the forefront, therefore, news from various meetings and summits at which the destiny of the country is discussed, have a strong influence on the exchange market. Uncertainty concerning the destiny of Greece in the EU – a medium-term bearish factor for the Euro.

As we see, there are various types of political events which influence the dynamics of the currency rates. The most important is to understand the current situation and to estimate the size of an exchange risk which it creates.

It is strictly not recommended to enter the market during important political events (elections, for example) but trading on market expectations can bring solid dividends!